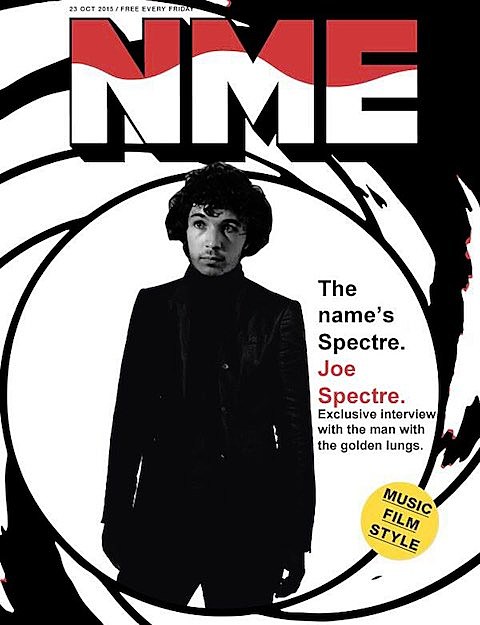 Spectres hail from Bristol, UK and make the kind of hazy, dark din that's not too far off from what Ride or Swervedriver did in their early days. Their debut album, Dying, came out back in February via Sonic Cathedral and is definitely worth a spin. Listen to the whole thing below. With the new James Bond film bearing a title very similar to their name, Spectres have done the logical thing and recorded their own unofficial Bond theme that mixes the sweeping elements inherent in the genre with their noisy predilections. And unlike Sam Smith, they dare to both title it and rhyme "Spectre." (Its b-side is a song called "Bondage.") It's out today via Sonic Cathedral (on gold vinyl!) and you can watch the video for it below.

In other indie James Bond news, label wiaiwya just released A Girl and a Gun - a Global POP Subterfuge, a new 007 tribute album featuring covers of the many movie themes by indiepop artists such as Hefner's Darren Hayman ("Goldfinger"), Black Tambourine's Pam Berry ("Underneath the Mango Tree" from Dr. No), onetime Voxtrox singer Ramesh (who collaborates with Charm Bracelet for "For Your Eyes Only") and 31 others. (This thing goes deep.) You can stream the whole thing below.

Spectre, the movie featuring Christoph Waltz as a Blofeld-like baddie, is out November 4.