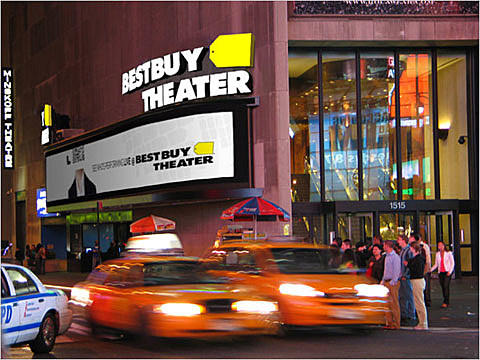 For whatever reason, I prefer "Nokia Theater" - it almost doesn't sound like a sponsored name or I just got used to it. "Best Buy Theater" on the other hand - all I can think about is blue and yellow ("Danzig played the Best Buy Theater" doesn't sit well).... Press release below...

The special intimate performance at Best Buy Theater will see Linkin Park performing material from the new album for the first time in public along with some of their best-known previous material, promising to be a near-impossible ticket to be had. This will be Linkin Park's only public performance in the US in 2010. The band begins its worldwide arena tour in October, with North American dates expected in early 2011.

Presale for current LPU members (official Linkin Park fan club / www.linkinpark/lpu) as well as fans that pre-order LPUX by August 22nd will be able to purchase tickets first, beginning at 10:00am EST on August 23rd. Non-members that pre-order A Thousand Suns via the (www.linkinpark.com) online store by August 22nd, will also be invited to a presale the same day beginning at 3:00pm. The Best Buy exclusive version of the album including "The Catalyst" featuring NoBrain chosen by Linkin Park and MySpace music can also be pre-ordered on (www.bestbuy.com).

"As Best Buy's biggest selling American band of all time, we are thrilled that Linkin Park will be the first to perform at the new Best Buy Theater, said Drew Panayiotou, chief marketing officer for Best Buy's US-based operations. "The Best Buy Theater underscores our continuing commitment to being a leader in entertainment, and we look forward to a successful launch."

Located at 1515 Broadway (at 44th Street) in world famous Times Square, Best Buy Theater has hosted a variety of performers since its grand opening on September 19, 2005 as Nokia Theatre Times Square. Artists that have played at the venue include Bon Jovi, John Legend, Rihanna, Fall Out Boy, Jay-Z, Sugarland, Prince, The Eagles, Alicia Keys, Sharon Jones & Dap Kings, and Phil Lesh & Friends who had an historic 14-night run in 2008. The 45,000-square foot theater has also hosted special events such as Dick Clark's Rockin' New Year's Eve, Good Morning America concert series performances by Janet Jackson and Usher, Bruce Springsteen's Gateway Schools Benefit, ESPN and Nickelodeon upfronts in addition to being the home of the annual Heisman Trophy presentation since 2005.