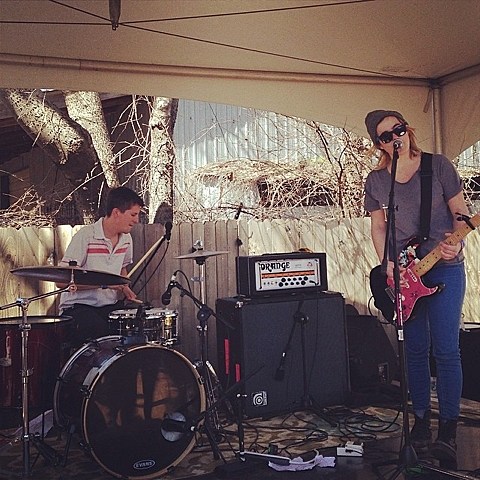 NYC fans of scrappy DIY punk take note, there's a great show happening with Philly's Nona, Providence's Downtown Boys, and San Francisco's joyride! on October 3 at Silent Barn. Rounding out the bill is quality locals Adult Mom, Arm Candy and new-ish band Alice. $10 at the door gets you into this all ages show. It's one of a couple dates for each of the out-of-town bands. All lists of dates below.

Nona remastered and re-released their debut LP, Through the Head, earlier this year on 6131. If you've still yet to check that out, it's a great mix of indie rock and poppy punk and should appeal equally to fans of Swearin' and Joyce Manor. The whole thing can be streamed below.

As we've said before, Downtown Boys are the kind of band you really have to see live. Their sax-fueled political/socially aware punk comes with an unforgettable stage show.

And joyride! just released their newest album, Bodies of Water (via Salinas), which was tracked, mixed and mastered by Jack Shirley (Deafheaven, Joyce Manor). It's the kind of unpolished pop punk Salinas is known for (Swearin', Radiator Hospital) and any fans of that kinda stuff should check this out. You can download it (name your price) at bandcamp, pick up the vinyl from Salinas, and stream it below.

Nona - Through the Head (re-release)

Downtown Boys - "Callate" at the Roots Cafe in Providence