Arts & Crafts put out three albums this year by artists who are not affiliated with Broken Social Scene. Pitchfork gave all three releases a 6.8 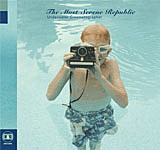 1) The Most Serene Republic's Underwater Cinematography [Buy it at Insound]

"As the first non-BSS-associated signing to their Arts & Crafts label, the Most Serene Republic are an appealing, wide-eyed anti-hand-me-down sextet that may not have any concrete physical bloodlines to their crafty Canadian neighbors, but-- with their sweeping, climactic pop tendencies-- could easily sneak into a BSS family reunion and steal some BBQ'd prime ribs with few questions asked." [Pitchfork gives them a 6.8]

A STORY: I saw this band for the first time last week opening for Metric. 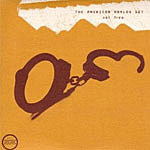 "Newcomers should head to From Our Living Room to Yours or Know By Heart to hear the AmAnSet at its best. As for fans, Set Free is ultimately just another American Analog Set album-- and probably the least essential at that." [Pitchfork gives them a 6.8

A STORY: I passed on the opportunity to catch their recent show at Joe's Pub in favor of seeing Doveman for the first time at Mercury Lounge with Silent League, King of France and Pelican Picnic. Part of my reasoning was the shows they have coming up at Mercury Lounge and Southpaw. 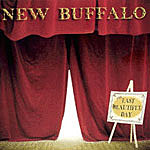 3) New Buffalo's The Last Beautiful Day [Buy it at Insound]

"When I heard New Buffalo was signed to Arts & Crafts, I sharpened my repertoire of trusty Canadian jokes, drooling at the opportunity to once again tackle the Great Indie Wilderness Up North with my razor wit. But alas, it was all for naught, as it turns out New Buffalo hails from another British Commonwealth, the one that used to be a prison island." [Pitchfork gives them a 6.8]

ALTERNATIVE REVIEWS: Cokemachineglow loves it | Splendid loves it too

A STORY: I haven't seen New Buffalo live yet, but I did hear a few live songs from the hallway outside the sold-out Arts & Crafts showcase at Pop Montreal (I eventually got in).

DOWNLOAD NB (MP3s)
Recovery
I've got you and you've got me

I thought of some 6.8 conspiracy theories (including one that linked these reviews , BSS, and Pitchfork to Satan), but on paper they started to seem dumb. If you have some, add them to the comments.

(thx to whoever it was that pointed out the 6.8 thing in the Arts & Crafts message board)