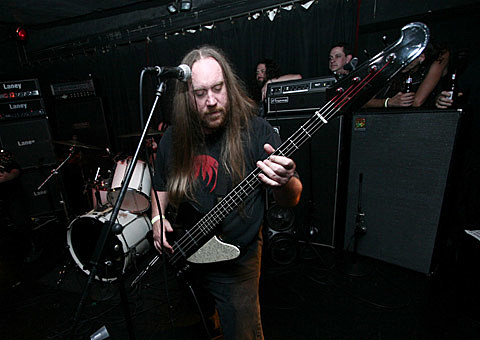 The Oakland sludge band Noothgrush--yes, named for Dr. Seuss's "little prismatic stoner imp who takes over your toothbrush"--recently released an LP of covers titled Uncovered Failures. On that LP you'll find covers of Pink Floyd, Celtic Frost, a John Willams/Styx mash up, and Duran Duran (who are also being honored with a tribute LP). Pretty safe bet this locks up the coveted grind cover album of the year award--hell, the thing opens with a Laura Branigan cover. So that rules. (Order yours from Choking Hazard.)

That Acheron show will be Ruine's first show ever--the NYC band features members of NYC black metal band Mutilation Rites (who just released a song and are touring) and grind band Magrudergrind, and delivers a hulking, torturous take on doom. Listen to a track below.

All Noothgrush dates are listed, along with that Ruine stream, below...