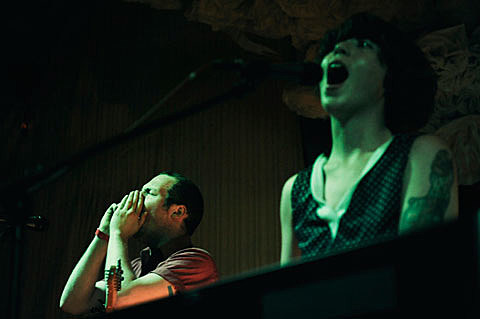 In 2009 we graduated college with little hope of finding jobs, so we started a band. We've made so many friends over the years because of this project and are so thankful to have met all of you, you made our band greater. To all the amazing kids who came to our shows, thank you for dancing up in front. I always forgot our songs because I was watching you. I think I decided it was time to leave New York last summer when we had to sell our van Dad for scrap. I know it's just a car, but to me, it was the end of an era. We are incredibly proud of the songs we've made together but I just don't think I can write another record in this city. And unfortunately, I can't uproot four bandmates and their girlfriends, believe me, I've tried. So, I'm taking a break to wander around for awhile and see where I end up. I will miss this band more than anything and I'm heartbroken to say that this show will be our last. Our second full-length is nearly finished and we can't wait for you to hear it. Thank you to our friend Matt who has pulled one too many all nighters trying to finish it. Please come to this last show and rage with us. Love, Brenda

After five years of making lovely pop, North Highlands are going their separate ways. Having played my first-ever Sound Bites show down at the Seaport/Fulton Stall Market and also played the "This Week in Indie" showcase at Northside (both in 2010) it's definitely a little sad for me. Luckily they're going out with a farewell party tonight (3/27) at Glasslands. Tickets are on sale.

The band have booked some friends to play the show as well: Bennio Qwerty which is NH guitarist Mike Barron's seriously rocking power trio; Ablebody the band featuring Christoph and Anton Hochheim, both of whom are in the current (killer) line-up of The Pains of Being Pure at Heart (and were in The Depreciation Guild); and Cowboy.

If you never checked out North Highland's terrific 2011 album, Wild One, you can stream it below. You guys will be missed.