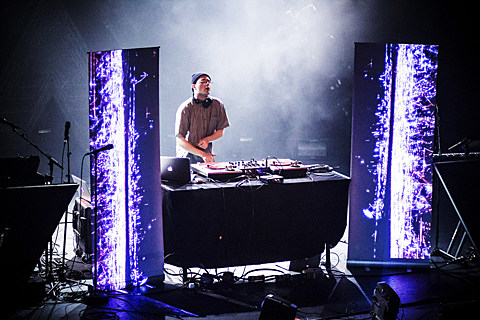 The music portion of Brooklyn's multi-venue Northside Festival is almost here, beginning this Thursday (6/12) and running through Sunday (6/15), and there continue to be updates. For one, all openers for Northside's four big outdoor shows have been announced. We already knew Woods are opening the War On Drugs show Friday at 50 Kent, and we know Julianna Barwick is too. As discussed, Saturday's Thee Oh Sees show in McCarren Park will be opened by The Blind Shake and King Gizzard & the Lizard Wizard. Saturday's Beirut show at 50 Kent will include a lineup handpicked by the band of Ratking and Malang Jobarteh, and Sunday's CHVRCHES show in McCarren Park will include The Range (who also opened for them at Terminal 5) and Hunters.

The McCarren Park shows are free with RSVP (CHVRCHES closed, Thee Oh Sees still open, and the 50 Kent shows are still on sale. All Northside shows are accessible with a Northside badge though entry is subject to capacity.

Other recently announced Northside shows include the ones at Brooklyn Night Bazaar: Nick Waterhouse, Baths and Watain. Plus the Cameo/Buzz Chips/Pancakces & Whiskey showcase at Cameo on Friday with Nite Jewel, Ejecta, Brothertiger, Psychic Twin and The Great Void (tickets). Check out the festival's full schedule.

And as mentioned, we at BrooklynVegan are presenting the NYC debut of Dan Boeckner's (Wolf Parade, Handsome Furs, Divine Fits) new band Operators at Baby's All Right on Friday (6/13). Openers for that show will be announced very soon.