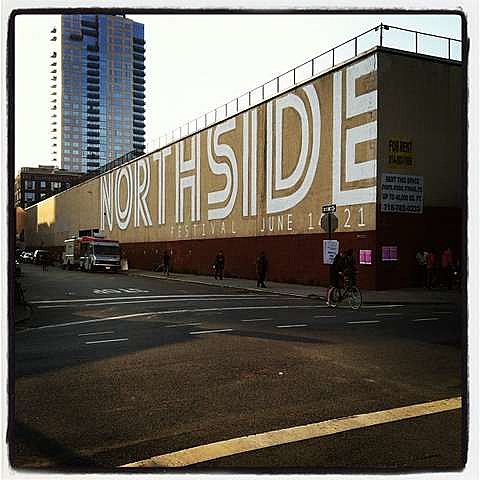 Well it's Day 2 of The Northside Festival and as a Williamsburg resident and concertgoer, it did feel like a real festival this year, at least in that I saw lots of people walking around with Northside totes and badges around their necks (though I say loop it through your beltloop and keep it in your back pocket). And the Festival's HQ this year takes up a whole block on N. 5th between Wythe and Kent, where they have panel discussions and live music and some sort of space age dome thing, and loads of free Heineken. Badges, totes, and beer...that's a festival.

Today at McCarren Park is the big outdoor Northside Fest headlining concert, with of Montreal, Jens Lekman, The Thermals, and Beach Fossils (minus Cole Smith). The weather is gorgeous today, the bands are all good and entertaining performers so even if you don't have a badge or want to fork over the $33.50 for a ticket it might be worth just going and hanging out in the park across the street and just hannging out. Beach Fossils start things off at 5PM.

Dean and Britta headline a free show in the same space on Saturday. 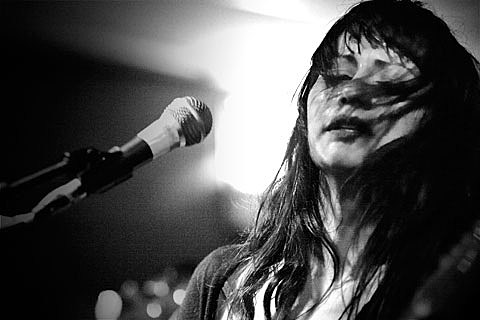 Tonight is also the BrooklynVegan Official Northside Showcase with Caveman, Frankie Rose, Fort Lean, and Hume. Both Caveman and Frankie Rose have been touring their butts off, polishing their live shows to a lovely sheen. And both are coming off great records as well. Opening are Fort Lean and Hume and should be a great evening all around. If you don't have a badge, tickets are still available.

In other Caveman news, you may have noticed their song "My Time" being used as the soundtrack to a new "I Love NY" TV commercial. You can watch it below.

Tonight is also the BBG/BV/Brutal Panda Northside showcase which happens at Union Pool (who only took 30 badges last night, be warned). It's pretty exciting as it features Tacoma's Harkonen who are playing their first NYC show since dissolution in 2005, and who knows when (or if) they'll return back to the East Coast. Also featuring the epic stoner-blues of The Atlas Moth, the Am-Rep-y hardcore of Fight Amp, and the always fun Whores, it'll be a night to remember. Tickets are still available or get in with your Northside badge.

On the complete other end of the sonic/cultural spectrum, you may be interested in knowing that Kitty Pryde will be in Brooklyn for the Northside Festival tonight (6/15) at Knitting Factory with Deniro Farrar. Tickets for that show are available. Kitty Pryde is a fairly divisive 19-year old rapper from Florida who writes of herself, "I'm Kitty (Pryde) don't listen to what they say on hypebeast!!!! <3 my music is bad <3." she put up a youtube video last month for her song, "okay cupid" (yeah, it the same name as that dating website), which went pretty viral (as of this post its got over 300,000 views, 2,300 likes and 1,400 dislikes) and now she's got an EP out called Haha, I'm Sorry, which you can stream or download for $1 on bandcamp. Though the $1 option is there, Kitty also provides a link to get the EP for free from mediafire and writes, "oh btw heres a mediafire link if u wanna do it the FREE WAY idk lol i hate payin for thngs 2." The EP includes "Okay Cupid," a song called "smiledog.jpg" where she addresses her criticism ("You say this little white girl is ruining hip hop/I say damn right and take a look at the ring pop"), and a song called "GIVE ME SCABIES" which overtly samples "Call Me Maybe." She's also got a non-EP track which is a (sarcastically?) stalkerish ode to Justin Bieber. Love her, hate her, or "who?" -- it's likely to be a hot ticket (though still available). Late show, doors at 11PM. 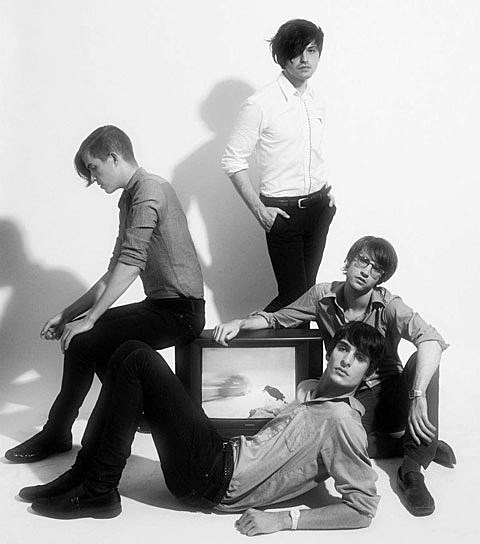 At Spike Hill, A Heart is a Spade and Punk Photo have put together a nice showcase with sultry sister act Zambri, the totally '80s sounds of Ice Choir, BV pals New Moods, and Fast Years.

The NYC Popfest folks are taking over the new Shea Stadium with Ski Lodge, Beach Day (who were pretty good last night at Knitting Factory), the mopey synths of Plastic Flowers and the provencial South of France.

If you lean toward the dark and synthy, Public Assembly is taken over by the The Bunker tonight with Kassem Mosse, Led Er Est and more.

Pop Montreal comes to Northside for a showcase tonight at Warsaw with Tinariwen and Buke & Gase, one of three Northside shows taking place at the venue this weekend.

And late night at Glasslands is the Lazerpop party with DJs Pictureplane, Teengirl Fantasy and Hooray For Earth. Pictureplane is playing an actual show (non-Northside) early tonight at 81 Java with Dope Body and more. That's in addition to the Pictureplane dates we posted the other day.

And there's lots more than this, obviously. Check out the whole Friday Northside schedule here. Streams and videos are below.

Caveman in I Love NY ad