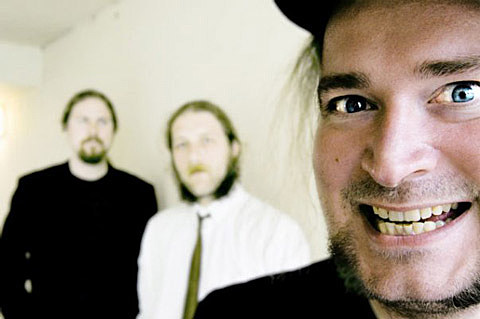 You could call Norwegian weirdos Virus quirky metal, but that doesn't really approximate their mind effing. Czral, leader of the three-piece, agrees: "Virus is more of an eccentric rock band than a metal band. People have said it sounds like a mixture of Talking Heads and Voivod." Oh and their first album, 2003's Carheart, has lyrical themes revolving around "dogs and cars." So, yeah, metal isn't totally accurate and quirky is an understatement. Fun, though? That they are.

Virus will be heading to the US for the first time this October, spending two headlining nights at NYC's Saint Vitus on October 25 & 25. The first night (10/24) will feature a bill including Krallice, Sannhet, and Couch Slut. The second night (10/25) reshuffles the deck with Ocrilim, Dysrhythmia (who will be playing with Oneida on Thursday [7/ 17] at Glasslands), and Geryon (who are playing the Acheron tonight [7/14] with Alrune, Belus, and Ancient Ocean). According to Saint Vitus, "[Virus] will be performing two different sets each night, and rumor has it that Czral will also be DJing at Saint Vitus Bar the night before, on October 23rd." The shows are currently the band's only North American dates. Tickets for both events (October 24 and October 25) go on sale tomorrow (7/15) at noon.

You can check out the Virus flyer along with some streams of the band below.