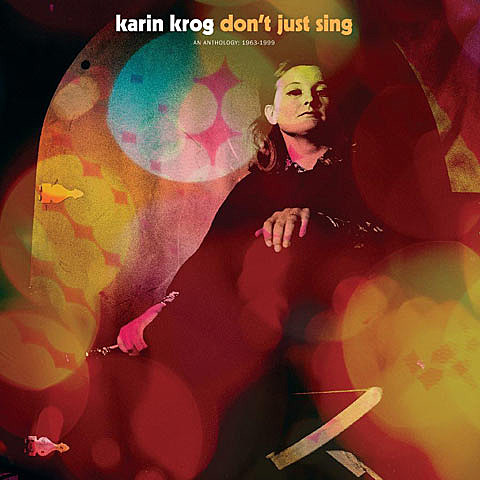 To listen to opening track "As A Wife Has A Cow" is to jump into the deep end. It's 54 seconds of words, voice, and technology, a looped, echoing reading of a Gertrude Stein poem. The effect is disquieting and alien but deeply rhythmic, too-and that's Krog's USP. Don't Just Sing takes in these spoken experiments along with free jazz, improvisation, standards, contemporary covers, and electronic manipulation. It features some of the best regarded jazz players in Europe, not least her partner, John Surman, the English saxophonist/multi- instrumentalist and composer. Like Annette Peacock, Krog experiments with solo vocals run through electronics and performs with progressive electric jazz combos and traditional acoustic groups as well.

Krog began singing jazz in the 1950s and started her first band in 1962. She not only had two tracks on the first ever Norwegian jazz LP, Metropol Jazz, but also became the first Norwegian jazz artist to record and release a full album (1964's By Myself on the Philips label). Her sound developed as technological advances made new recording techniques possible, and she quickly embraced the album as the perfect form to contain her sonic experiments. "There is such a thing as too much manipulation," says Krog today. [Light in the Attic]

Norwegian jazz singer Karin Krog, whose work (most of which was never released in the US or UK) got a profile boost this summer when venerable reissue label Light in the Attic released Don't Just Sing | An Anthology: 1963-1999. You can stream it via Spotify, and stream 1974's classic "We Could Be Flying" and her cover of "Ode to Billy Joe," below.

Krog will be making a rare visit to NYC this month, playing Joe's Pub on September 30 where she'll be accompanied by pianist Steve Kuhn, with whom she recorded We Could Be Flying. Tickets are on sale.