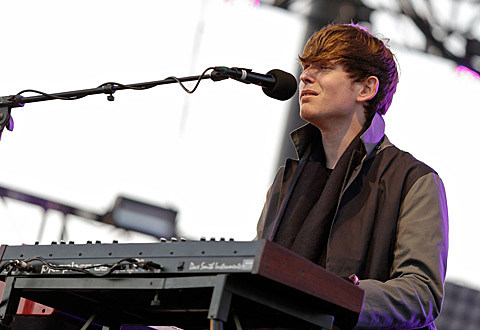 James Blake recently resumed his North American tour, which began on the west coast in October, hitting Treasure Island and other places, but was postponed for five dates so James could perform at the Mercury Prize ceremony back in his homeland of the UK. In case you didn't hear, James' album Overgrown won the prize. That win has seen an increase in sales for Overgrown -- yesterday (11/4) FACT reported that his Amazon sales have gone up over 2500%. Check out a video of James being interviewed after his win, below.

The tour hit Philly last night (11/4), comes to Boston tonight (11/5), and then James will return to NYC for two nights at Terminal 5 on Wednesday (11/6) and Thursday (11/7). Tickets for both T5 shows are still available, and we're giving away a pair to each night. Updated dates are listed, along with contest details below.

Since we last spoke, LA producer Nosaj Thing was added to the tour, including both NYC shows. Nosaj Thing released his newest album, Home earlier this year, and like James Blake, he collaborated with Chance the Rapper.

Speaking of James Blake collaborating with rappers, after being rumored to appear on Drake's Nothing Was the Same (which he didn't), he recently offered a remix of "Come Thru" from that album. You can stream that, along with the list of tour dates, contest details, and a couple videos, below...