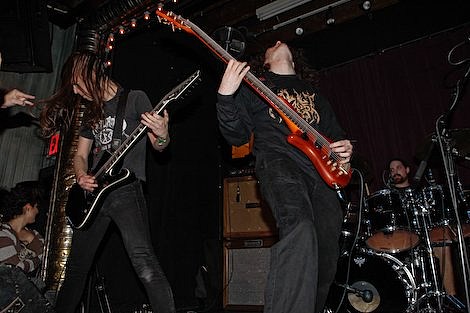 Who needs Mayhem with a lineup like this? BrooklynVegan and Osiris are proud to present that the great Ludicra will team up with Krallice, Castevet, and Atakke for a killer show at Europa on 4/18. Tickets on sale soon. A few more announced Ludicra dates are below.

Ludicra is prepping for an appearance at Scion Rock Fest, but more imminently, have their new record The Tenant due in March. Order that record via Profound Lore.

BrooklynVegan is also on board as the official sponsor for the Profound Lore/20 Buck Spin Official Showcase at Headhunters on 3/19 during SxSW. Ludicra won't be on that show, but the killer trio of Salome (who is also playing a BV Day Party), Coffinworm, and Yakuza will be reppin' the label.

The Ludicra show is one of three BV-presented metal shows scheduled for April. The other two are Weedeater on 4/10 (tix, a BV/Osiris show) and Narrows on 4/24 (tix, a 1000 Knives/BV show).

Some live Krallice and Ludicra videos below...