The Nothing Changes party goes down every Wednesday night around Midnight at Lower East Side club Home Sweet Home. Tonight (3/19) is a selection of noisy punk courtesy of Japan's System Fucker and Boston's Aspects of War. The duo have been on the road together, hitting up a number of East Coast-ish cities, including a stop at the Acheron earlier this month -- did you go? Expect insanity if you do tonight.

As usual, there's a lot to look forward in the coming weeks at Nothing Changes. Next week (3/26), electronics experimentalist Flex 1000 teams up with DJ Dog Dick, and the week after that (4/2), it's Youthquake and more TBA. Then on April 9,  electronica purveyor Ron Morelli (of the label L.I.E.S.) will DJ along with a performance by Uniform which features members of Believer/Law and The Men, and the Nothing Changes show will be the band's debut performance. Further down the line is Nothing Changes' one year anniversary celebration on April 23, featuring coldwave artist Martial Canterel.

Nothing Changes schedule with full lineups are listed, along with flyers below... 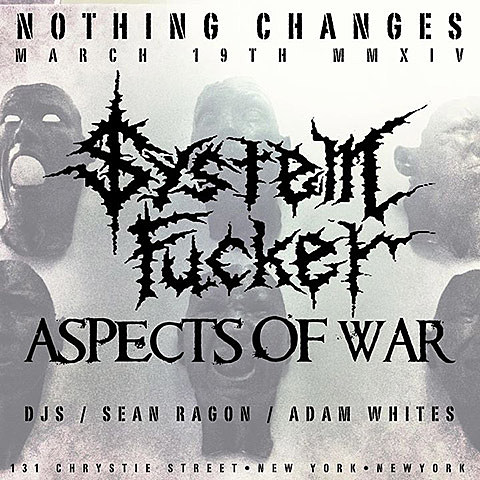