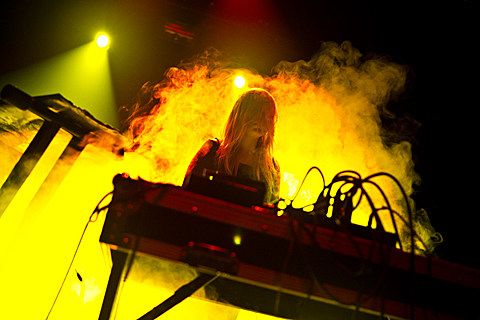 Nothing Changes is the weekly late-night party that happens at small Lower East Side bar Home Sweet Home that tends to feature relatively obscure goth/noise/punk/etc artists, and sometimes hosts bigger bands while they tour through NYC like Iceage and Merchandise. As part of the 2015 Red Bull Music Academy NYC residency, Nothing Changes will throw its biggest party ever at May 13 at Output, the Williamsburg dance club with one of the city's best sound systems.

Prurient will be "presenting his seminal album Pleasure Ground for the first time" at the Nothing Changes show, and he's also releasing a new album this year. It's called Frozen Niagara Falls and is due May 12 via Profound Lore. Album trailer below.

Pharmakon has other upcoming shows in NYC as well.

The Nothing Changes party also celebrates its two-year anniversary this Wednesday (3/11) at Home Sweet Home with Lust for Youth (who also play Baby's) and Soren. That goes from 10 PM to 4 AM, and is $8 at the door. The following week has Oake and Lussuria.