Nothing at BV CMJ 2013 (more by Amanda Hatfield)

Philly shoegazers Nothing and San Francisco's Weekend must get along pretty well. They've already toured together more than once in the past year, and they're going out again in March.

Their two-ish week North American tour begins with a record release party for Nothing's Relapse Records debut at Philly's Kung Fu Necktie on March 2 and loops down to Texas, where the two bands will part ways. Nothing will hit SXSW for several days, including an appearance at Relapse's official showcase at Dirty Dog Bar on 3/12, which will also feature Windhand, Christian Mistress, Obliteration, Primitive Man and Pyrrhon (my band), and at Dallas's Spillover Music Fest on 3/16, where they'll briefly reunite with Weekend. Nothing's tour will then bring them back to the East Coast, where it will terminate with a NYC show at Saint Vitus Bar on 3/20. Tickets and supporting acts are TBA, but keep an eye out.

Check out some live footage of Nothing at our CMJ party and both bands' full sets of dates below... 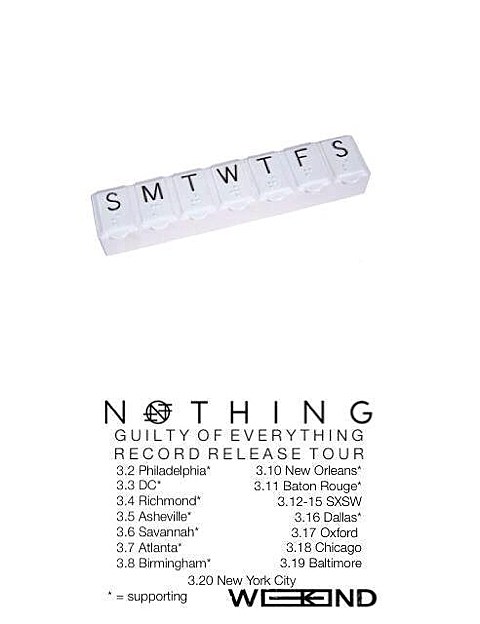