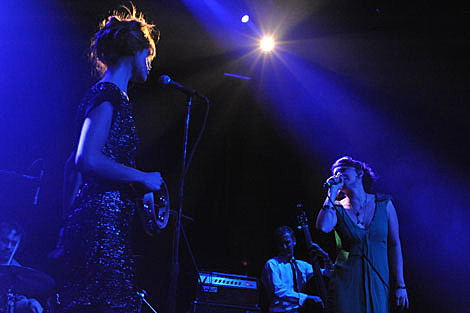 Now [Nouvelle Vague] (comprised of Marc Collin and Olivier Libaux) has gone for something even more improbable. For "3," they take songs created by everyone from the synthy Soft Cell to the archtypically punky Sex Pistols and make them mosey in a rural American mode. Specifically, Nouvelle uses elements swiped from the southern and western part of the U.S., from country to folk.

It makes for something to either reel or marvel over.

You'll surely have one of those reactions when you hear their decidedly pastoral take on The Go-Go's formerly giddy "Our Lips Are Sealed," or their hick-like rethink on Talking Heads' once peppy "Road To Nowhere." [New York Daily News]

Since their last NYC show & short US tour in June, Nouvelle Vague's third record, titled 3, came out in the US (10/20) through Peacefrog/EMI. It continues the band's "cover song" conceit while expanding its kitch palette to include genres like country and bluegrass. Guest vocalists include "Martin Gore (Depeche Mode), Ian McCulloch (Echo & The Bunnymen), Barry Adamson (Magazine) and Terry Hall (The Specials/Fun Boy Three)." They also have their own iPhone app which includes one exclusive track (a Stranglers cover).

The band is currently at the end of a massive European tour. They'll return to NYC next year to play a show at Webster Hall on Saturday, January 23rd. Tickets are on sale now.

See some of their covers live with tour dates below...