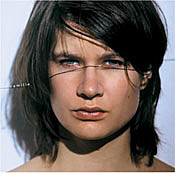 "A lot of references come to mind while hearing 'Le Fil' (Narada), the extraordinary album by French singer-composer Camille (she uses only her first name). It was released a year ago on Virgin France (and awarded a pair of Victoires — the French equivalent of the Grammy Award) and now is being released — after far too long a delay — in this country.

Camille put out her first CD, 'Le Sac des Filles,' in 2002; she also was featured prominently in a few tunes on Nouvelle Vague's 2004 album with bossa nova versions of new wave songs. Neither fully anticipated the music on 'Le Fil.'" [LA Times]