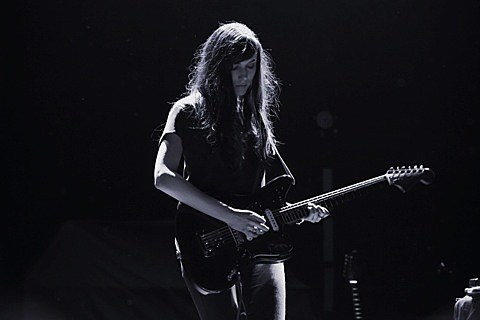 Drone guitar master Noveller (aka Sarah Lipstate) recently wrapped a tour opening for St. Vincent, during which she kept a video diary. It's 40 videos and just over an hour and a half long. You can watch the whole thing below.

Noveller has other live appearances coming up, mostly in her hometown of NYC. She'll open the second of two Sun Araw shows happening at Baby's All Right on September 3 & 4. Night 1 will be opened by Man Forever and Hiro Kone, and night 2 also has Psychic Reality on the bill. Tickets for both shows are still available.

She also has two duo sets with J.G. Thirlwell (Foetus) coming up, one of which we previously mentioned, the David Lynch Foundation benefit happening at Saint Vitus on October 4 (tickets). The other happens two days earlier at Joe's Pub (10/2). Tickets for that one are on sale now.

Sarah will also play a duo set with Sonic Youth's Lee Ranaldo in the Amphitheater space at Lincoln Center on November 20, along with a screening of Sarah's filmwork.

All dates are listed, with the video diary from the STV tour, below...