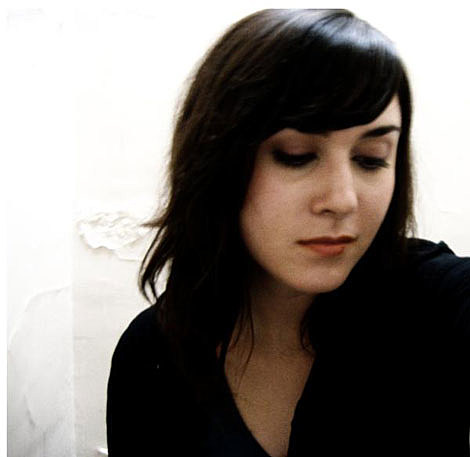 Noveller is the solo project of Brooklyn-based sound artist and filmmaker Sarah Lipstate. She has performed in Rhys Chatham's Guitar Army, and as a member of Glenn Branca's 100 guitar ensemble. In March 2008, Lipstate joined Parts & Labor as their new guitarist.

Monthly film and music series Cinema 16 will return to the Bell House on Sunday, April 19th. The event last visited the venue on February 25th with Wild Yaks and Artanker Convoy providing the live soundtrack to the night's silent films.

Sarah also has shows coming up at Monkeytown, Issue Project Room, The New Museum, and at Music Hall of Williamsburg (for No Fun Fest). All of her dates, a live performance video, and more background on Cinema 16 and short films by Joel Schelmowitz and Kenneth Anger, below...

In the era of silent film, live music enhanced the moving picture and brought communities together with a visceral, interactive audio-visual experience. Today, when the film experience has been reduced to the tiny screens of our laptops and ipods, oftentimes experienced alone, Cinema 16 offers a revival of community.
Named after the New York-based avant-garde film society in 1947 and inspired by Maya Deren's Greenwich Village exhibition of experimental films, Cinema 16 pairs edgy contemporary musical artists with vintage films, curated and produced by photographer/curator Molly Surno. For over a year now, the passionate Surno has lovingly programmed these semi-monthly screenings and performances, melding the worlds of art, film and music.-[press release]

Kenneth Anger - Invocation of My Demon Brother (1969), part I

"Cinema 16 returns to The Bell House in Brooklyn, NY, and will feature original scores by cutting edge musicians for a series of curated short films. Experimental Brooklyn musician and singer Julianna Barwick performs an original score for "1734" (a short by Joel Schelmowitz and "Pleasure Dome" (by Kenneth Anger). Brooklyn filmmaker and sound artist (and also Parts & Labor guitarist) Sarah Lipstate as her solo project Noveller performs an original score to a selection of her own original films."