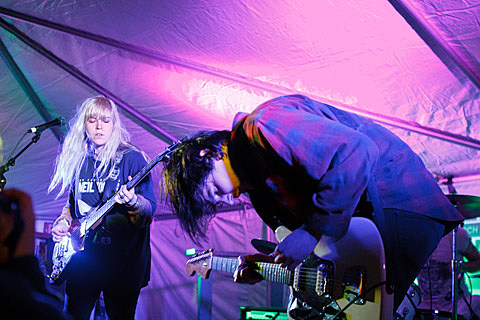 As mentioned, Vancouver noise punks Nu Sensae, who are still touring behind last year's bruising Sundowning, will be coming to NYC for this year's Northside Festival, and one of their shows has just been announced. They'll play an Impose/My Social List party on June 16 at Shea Stadium with a killer lineup of psych punks Destruction Unit, local post-hardcore band Big Ups (who have a ton of other shows) and Western Mass sludge-psych rockers Psychic Blood (who have toured with Nu Sensae before). Tickets for that show go on sale May 16 at noon. You can also try to get in with your Northside Badge.

That show is the second Northside show that Destruction Unit has announced so far. It happens one day after their tour with Merchandise and Milk Music hits 285 Kent (6/15). Tickets for that show are still available. Destruction Unit released their impressive new LP, Void, earlier this year, but as I said when I saw them at SXSW, you really have to see it live.

If you're headed to these shows from outside of Williamsburg/Bushwick, the L Train will be running, despite earlier reports that it would be closed for maintenance during Northside.

All Nu Sensae and Destruction Unit dates are listed, along with videos/song streams from all four bands, below...