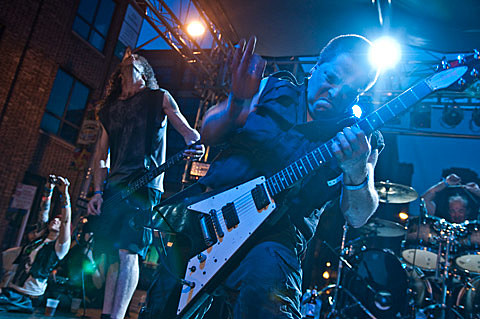 Last year, Dan Lilker of NYC thrash veterans Nuclear Assault (and Brutal Truth and Anthrax) gave a statement on his retirement from music, which teased a final album and tour from Nuclear Assault:

In 2015, it will be 30 years since Nuclear Assault solidified our lineup and started making a name for ourselves in the metal/crossover scene. To commemorate this, the band will write and record another album and play some shows for a 'Final Assault.' The live front will be of a limited nature due to the reality of people in the band having careers that they can't just walk away from for the time needed to go tour the world like we did in the '80s. Nevertheless, we will try to do whatever we can, especially in the summer, to get out there and thrash for everyone again. Progress on writing music will not go quickly due to a couple of facts; we are geographically challenged, so we can't just jam once a week like we used to, and we want to make sure that this album is really killer so we can go out with a big bang.

Now those things are finally coming into fruition. They have a new EP called Pounder coming June 1 via Sidipus Records, which follows 2005's Third World Genocide LP. No music is out from that yet, but they're promising "4 killer 'old school' thrash tunes." Stay tuned.

They played their first show in a while last weekend at New England Hardcore & Metal Fest, and this May they'll begin the international "Final Assault" tour, which runs through September. The final show of the final tour happens in their hometown on September 12 at Gramercy Theatre, for now at least. We expect more dates to be added to the tour before long, and it's of course possible they'll happen after that date.

The NYC show is with two other veterans of the '80s-era NY/NJ metal/punk scene, Murphy's Law and Whiplash. Tickets for that show are on sale now. All dates along with the videos for 1988's "Brainwashed" and 1993's "Something Wicked," below...