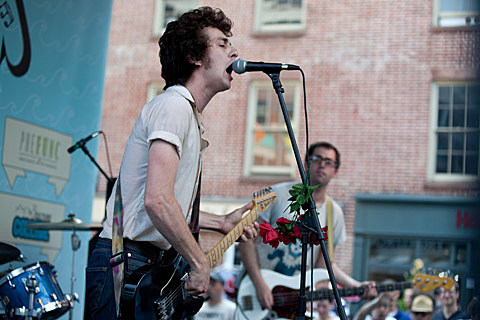 They've also got a handful of dates coming up, and play their hometown a few times during the run. The first is this Thursday (1/22) at Bowery Ballroom as an opener on the previously discussed Amen Dunes / Kevin Morby show. Tickets are still available. Then, as mentioned, they play the first night of the three Don Giovanni showcases at Knitting Factory on February 6 with Shellshag, The Hamiltons, Mal Blum, Black Wine, Crow Bait and host Chris Gethard. Tickets for that one are still available too.

Lastly, they've got a newly-announced show happening at Bell House on April 3 with White Hills. Tickets for that one go on sale Friday (1/23) at noon. All dates are listed below.

In news related to this Thursday's show, Amen Dunes just released the new Cowboy Worship EP through Sacred Bones Records which includes reworked versions of four songs from last year's Love, one from 2011's Through Donkey Jaw, and a cover of Tim Buckley's "Song to the Siren" featuring Hubble (aka Ben Greenberg, ex-The Men, also of Uniform). Listen to that one below.

Also, Kevin Morby's band with Cassie Ramone, The Babies, have a new digital single out on Woodsist with two previously-unreleased b-sides. Listen to one of those, "Got Old," below.

As for noisy psych rockers White Hills, they also have a number of dates coming up in addition to that Bell House show with Nude Beach. Their tour includes stops at ATP Iceland, Primavera Sound and another NYC show happening at Mercury Lounge on March 10 with Australia's The Black Ryder. Tickets for that show are on sale now.

All dates for Nude Beach and White Hills, as well as the Nude Beach, Amen Dunes and Babies song streams, below...