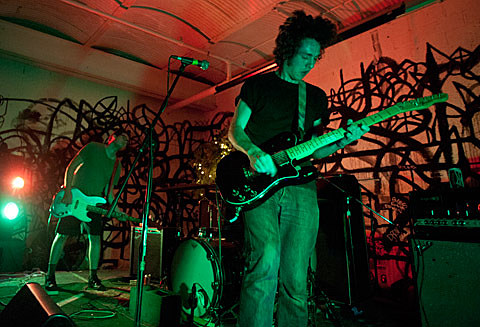 Nude Beach's album II gets it's Other Music Recording Company re-release this week and with it a couple parties. The band play Other Music tonight (8/13) at 8PM which is FREE but limited capacity, followed by a show at Union Pool on Thursday (8/16) with Swearin', Golden Clouds and Yogurt Brain. If you haven't heard the album -- which came out in limited release earlier this year -- it's recommended for fans of The Replacements, Tom Petty, Bruce Springsteen, Big Star and melodic punk with a dash of Americana. Stream it all at Spin.

In true Nude Beach fashion, the band has packed in yet another show, this time scheduled for the end of the summer at Death by Audio on August 29 with Naomi Punk, Sleepies and Shoxx.

Full tour dates are below, along with some Nude Beach II streams. West coasters and homies in the Rocky Mountains, look out for the band this fall... details forthwith. UPDATE, West coast/Midwest dates added.

"Walkin Down My Street"