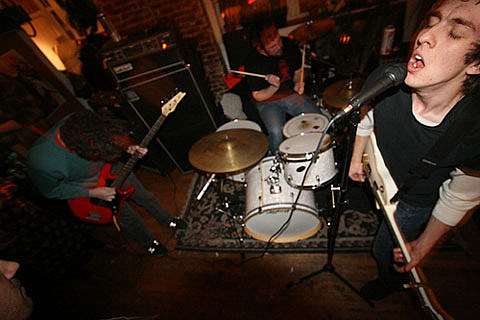 Nude Beach (the band from NY, not the band from PA) are releasing a self-titled LP, their first, on Mandible Records this week. To celebrate, they're kicking off a tour by throwing a party at Lulu's (113 Franklin St) in Brooklyn TONIGHT (6/10). Prior to this record, the only Nude Beach release was a 7 song "demo tape" on Dead Broke Records. Listen to some songs on MySpace.

Joining them at Lulu's are Stupid Party, Roman Candles and Cool Intentions. It's Stupid Party's first show in a long time. They've been busy recording, getting ready to release a new 7", and Nate has been playing in the Babies. I heard the new SP songs live, last time they played, and they sounded great. Don't miss the double bill (but if you do, Nude Beach are back at Lulu's on July 8th).

All Nude Beach tour dates below...