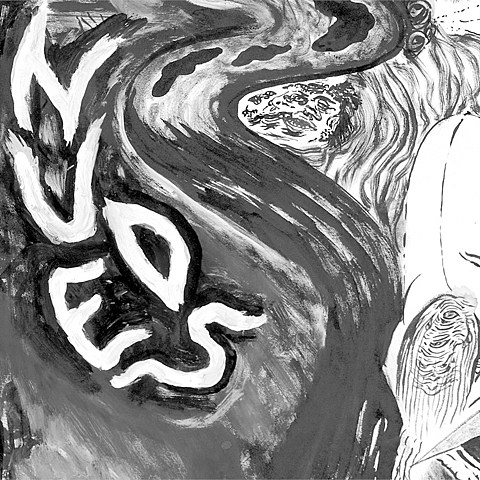 Seattle punks Nudes recently released the 7" Stain on Iron Lung Records. Uncompromising and uncomfortable, the three tracks speed along like the Germs while taking breaks for feedback-lashed, buzzy bass lurches that lay on the scuzz thickly. As if the audio wasn't enough of a gut punch, the band also cut a surreal video for "Bleach Stains." You can hear Stain and see the Lynchian "Bleach Stains" below.

Nudes are currently out on tour, hitting a number of locales over the next month, including Baltimore, Pittsburgh, and a couple Canadian tour stops. On July 15, the band plays Brooklyn's Lulu's with Kurraka, Nandas, and Creeping Dose. Tickets are $7 at the door.

Austin's Kurraka also released a new album and are also on tour, crossing paths a few more times with Nudes. Self-described as "dark raw punk," the trio's eponymous full-length makes the most of forceful chords, a huge bass tone, and reverbed shouts to create a simple but effective sonic wallop. Kurraka stream and their tour schedule, below.