"In addition to being the sharpest-dressed band in Chicago, JC Brooks & the Uptown Sound have been taking the city by storm with their unique brand of raw power soul." - Gaper's Block 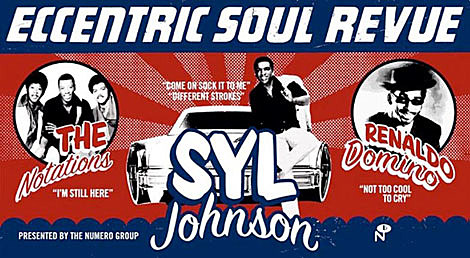 Motown had one, so did Stax. Three deep soul acts and one smoking hot band to back them up. The triple-header of R&B: the soul revue. Once a mainstay of theaters, gymnasiums and VFW halls everywhere, the soul revue ultimately vanished in the late seventies as recorded sound pushed live performance out of the limelight and onto car stereos and refrigerator-sized boom boxes. The performers returned to their day jobs and the world was the poorer for it.

That is, until April 4th, 2009, when the Numero Group, the world's premier reissue label, mounted the first Eccentric Soul Review, packing Chicago's Park West Theater with soul-hungry acolytes, satisfying them and then some with the real thing: a seventeen-piece band backing, The Notations, Renaldo Domino, The Final Solution, Nate Evans and Syl Johnson, putting on a show that combined seventies slick with revival meeting fervor.

It was a magical evening, as the past lived and breathed and got on down, right here in the present. Those in attendance went home that night knowing they'd seen something that just wasn't done anymore. And they went home wanting more. Well, the wait and the want is over. The Numero Group is taking this show on the road: Syl Johnson, Renaldo Domino and the Notations, backed by JC Brooks & The Uptown Sound are hitting Columbus, Washington DC, and two boroughs of New York City.

The revue visits NYC's Grand Ballroom and the Music Hall of Williamsburg on November 12th and 13th, respectively, with special guest Missy Dee. Tickets are on sale.

The premise is somewhat similar to what's going on at the Brooklyn Soul Festival, which occupies the Bell House on August 28th and 29th. The house bands for those nights will be Eli "Paperboy" Reed & the True Loves for the first, and the Sweet Divines for the second.

The trailer for the Eccentric Soul Revue, a flyer and all tour dates are below... 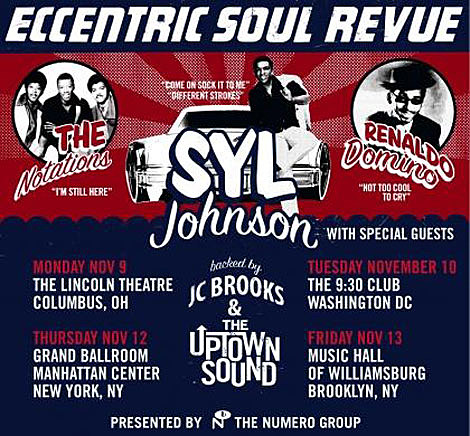