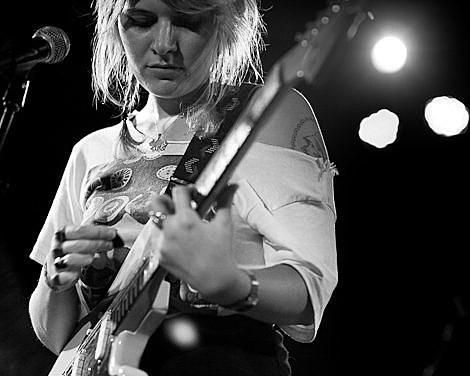 Greetings from Toronto. NXNE, the Toronto music/film/interactive fest is happening this week. It kicked off its music programming last night, Wednesday, June 16th, and runs through Sunday with shows at 50+ venues (here's a map of the spots). The festival also coincides with the now-affliated Broken Social Scene-helmed Toronto Island concert that features Pavement, Band of Horses, Beach House and others on Saturday, June 19th.

There weren't many Wednesday night shows. The official kick off party was just Eagles of Death Metal (sadly, without their normal bass player) at The Phoenix. And there was a gig or two with Canada's Hollerado (who have at least six shows at the fest lined up). One of them was up in the CN Tower.Still Life Still played the Mod Club with Denmark's The Blue Van.

One of the main hubs will be the free-to-anyone outdoor stage at Yonge-Dundas Square with headliners Thursday night X and Mudhoney, Friday night Sloan and k-os, Saturday night Iggy and the Stooges preceded by The Raveonettes, Wavves, Surfer Blood and others, and Sunday's De La Soul, Kid Sister, Phenomenal Handclap Band and NOLA rapper Big Freedia.

There's isn't a ton of stuff going on during the day. Most of the shows are in the evening, but you can check out picnics with music in Trinity Bellwoods Park Thursday to Sunday from 2-5 pm. More details on the flyer below.

DFA band Free Energy also plays the outdoor stage on Thursday (at 6pm). It's their first of two shows that day. Their second is at 10pm at Horseshoe Tavern, part of the KEXP showcase. They go on right before Warpaint so that's a solid night right there.

Thee Oh Sees, Best Coast, WOMEN,, Goner Records band CoCoComa and Friendo (who share a member with WOMEN) all share a bill at the Great Hall. That should be a crazy show.

Other Thursday highlights include The Besnard Lakes at Mod Club Theatre, Buck 65 at Rivoli, Walter Schreifels (Gorilla Biscuits, Rival Schools, Quicksand) at Bovine Sex Club, DD/MM/YYYY at The Garrison, Rock Plaza Central at Gladstone Hotel Ballroom, Zola Jesus and HEALTH at Sneaky Dees, Junior Boys at the Social, Glass Candy at Wrongbar, and the first of three Strange Boys shows taking place at the Silver Dollar. Strange Boys play Thursday after Fucked Up side project the Bitters and before a special guest who I think is WAVVES.

Friday night hosts what may be the best show of the fest. It's the Chunklet showcase at Horseshoe Tavern and it looks like this

It's the only show (that I know of) that local punk band The Brutal Knights are playing (update: Brutal Knights are not playing - see comments) during the fest, though Brutal Knights member Nick Flanagan is hosting what may end up being the best panel. "All The Other Panels At NXNE Are Wrong. Here's Why" has only two other participants: Damian Abraham from Fucked Up and Chunklet's Henry Owings.

Other highlights on Friday include Brant Bjork and the Bros at Bovine Sex Club, Zola Jesus, Best Coast & The Soft Pack (followed by a Cold Cave DJ set) at The Garrison, Timber Timbre w/ DD/MM/YYY at Gladstone Hotel Ballroom, AA Bondy w/ Avi Buffalo and John Doe & Exene from X (but sadly no Simone Felice) at The Great Hall, La Strada at the Drake, WAVVES/Japandroids at Lee's Palace, Inlets/Silje Nes/DM Stith at Whippersnapper Gallery, and Katie Stelmanis and Big Freedia at Wrongbar.

Girl Talk is also playing at the Academy on Friday. They're letting in 50 badges.

Saturday has the most frustrating conflicts. In addition to BSS/Pavement on the island which coincides with Iggy & The Stooges on the main stage, there's also a Scion-sponsored showcase with Les Savy Fav, Surfer Blood, Mannequin Men, The Grates, The Meligrove Band & a late night special guest (from the West Coast) at Wrongbar. That said, I'm hoping to hit at least part of all three. I may have to miss Pavement to see Iggy (which would be okay since I have five more chances to see Pavement coming up in NYC).

JEFF the Brotherhood say they're looking forward to Japans's Gagakirise, who are on the NXNE lineup, but don't appear to actually be here.

UK buzz band Comanechi are here and play three shows though. A flyer that lists two of them is below.

Too much!, but I still probably missed a ton. For every band I've heard of, there are 20 listed on the schedule that I haven't so please leave recommendations in the comments.

A full schedule of bands is here. More info on some of the above-mentioned shows with flyers and a new video of La Strada are below... 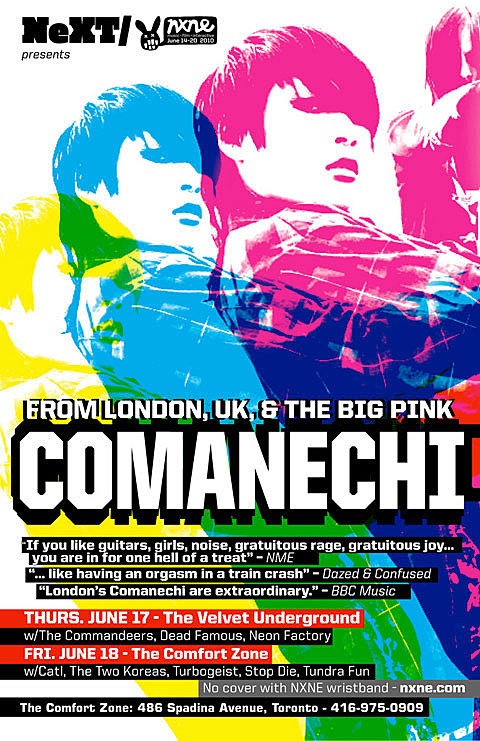 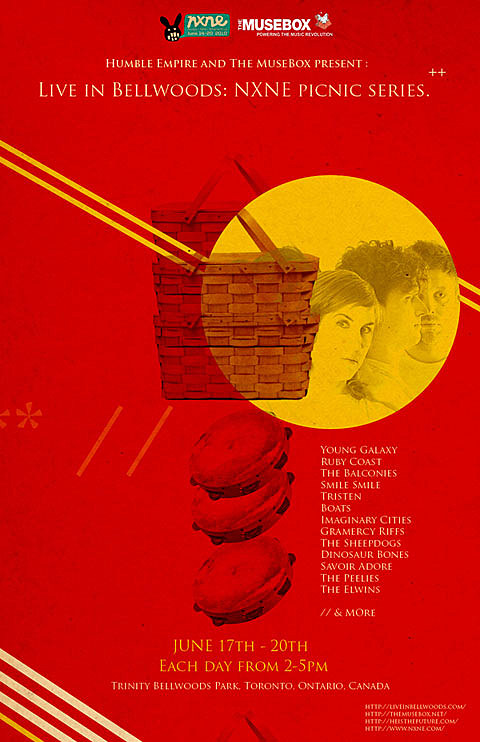 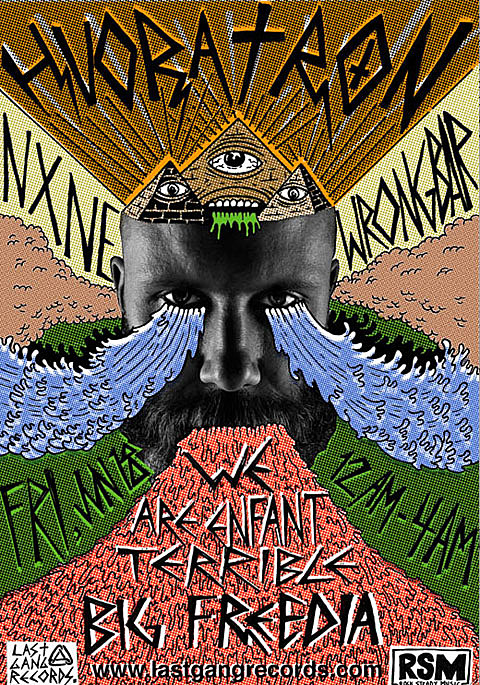