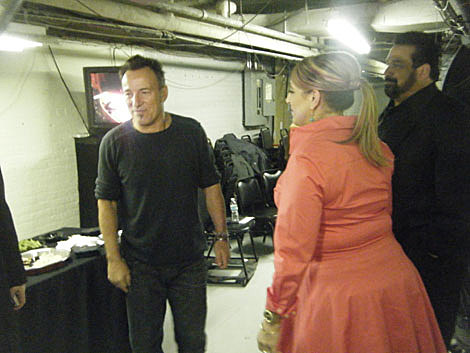 The New York Comedy Festival runs through Sunday. It kicked off last night at Town Hall with the "Stand up For Heroes" benefit...

[Host Brian] Williams walked onstage with a laptop and opened his monologue with the words: "Yankees 2, Phillies nothing." There was loud applause from the New York crowd missing Game 6 of the World Series.

He quipped that he wanted to be a full-service provider onstage and offer sports and weather updates in addition to covering the news. Williams also shared jokes about military food and being from New Jersey.

[Bruce] Springsteen threw in a few jokes, including one about Pepsi having created a drink that includes Viagra and that is called "MountAndDo."

One of his guitars and four Madison Square Garden tickets were then auctioned off by auctioneer Jamie Niven, the son of actor David Niven, for $50,000. "Law & Order: SVU" star Mariska Hargitay walked away with the goods to much applause.

Louis C.K. had the audience in stitches with edgy material about divorced life and his kids.

Colbert offered some topical humor, talking about his experience visiting the troops in Iraq, which he described as hot and dangerous, "like Texas with fewer guns." He also described a former Saddam Hussein palace as mindful of a house decorated by "The Real Housewives of New Jersey." [Hollywood Reporter]

Assuming Mariska uses those MSG tickets herself, she'll get to see one of two Bruce albums performed in full for the first time. Louis C.K. performs again during the festival at Caroline's on Sunday. Ricky Gervais was there and plays again at Carnegie Hall tonight (11/5). Andy Samberg was probably not there due to watching the Yankees game, but he will be at Town Hall as part of the festival on Sunday. More shows are listed in our original post and at the fest's website.