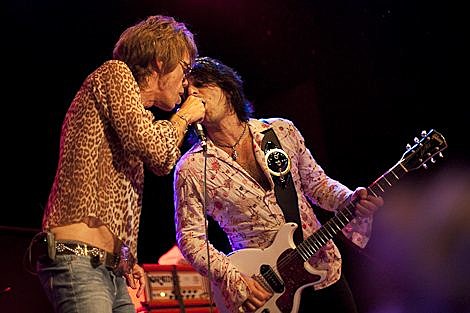 New York Dolls, now with ex-Blondie guitarist Frank Infante on board, have scheduled a free show UPDATE: We're told this is actually only going to be an autograph signing now.... at Best Buy in Union Square (not to be confused with "Best Buy Theater" in Times Square) on 3/15 at 6:30PM in support of their forthcoming LP due that day on 429 Records.

Be one of the first 300 people to buy their new album, Dancing Backward In High Heels, at Best Buy Union Square starting at 12:01 am on Tuesday, 3/15 and you will receive a wristband which guarantees admittance to the event. Arrive early. Space is limited.

The show signing is in addition to the previously discussed 3/16 show at Bowery Ballroom which you can still buy a ticket for.

The Dolls also recently announced UK , Spain and Japan shows. Bowery and Best Buy are is still their only current U.S. date. All dates are listed, with some videos, below...