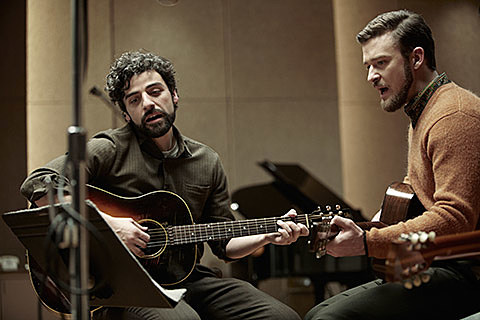 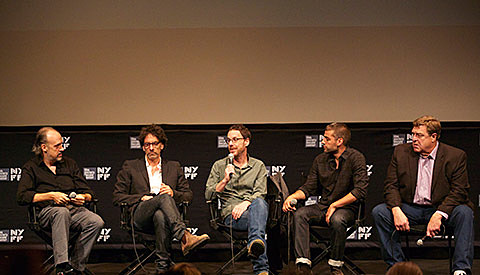 Tonight marks the start of the 51st annual NY Film Festival at Lincoln Center. As with every year, the collection of films and events presented are varied and eclectic and surprisingly this time includes a number of comedies, something rare for this festival. Rockstar Games will have a presence in honor of the new Grand Theft Auto game. There are plenty of avant garde films, documentaries and restored classic revivals. There's Jim Jarmusch's vampire romance Only Lovers Left Alive, and Spike Jonze's Her (with its Arcade Fire soundtrack). This year includes an always welcome retrospective of some of Jean-Luc Godard's works including the surreal, funny and one of my favorites of his, Alphaville. Also Weekend and the still unjustly maligned Hail Mary. Most of the films this year as with every year are already sold out but you can almost always find someone selling a ticket outside before or take your chances on the waiting line. Get there early if you really want to see a certain film.

We are covering the festival this year and I've already seen a number of the films. Below is a short handy guide to what I have seen so far and loved with others not so much. We will be back once the festival is over with reviews of the rest of the films. So take some time out from your busy concert going and go catch one of these films. Also, here is your obvious spoiler alert if you are one who chooses to not know anything about a film before seeing it. 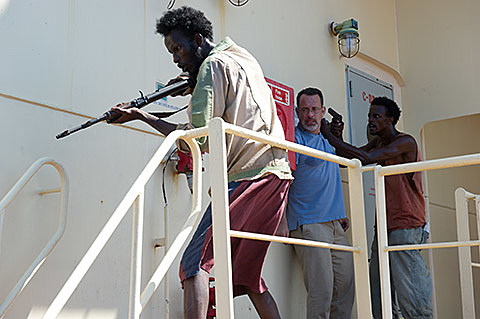 Let's start off with tonight's gala opening Captain Phillips, the new film from director Paul Greengrass who directed the second and third Bourne films among others. He was at the festival years ago with his first, and I think best film, Bloody Sunday. In this film he once again looks to tell a real life story, this one being the 2009 hijacking of the MV Maersk Alabama ship off the coast of Somalia and starring Tom Hanks playing the by the books, stoic and heroic Captain Richard Phillips. The film is based on Phillips novel about the hijacking. It is this year's Zero Dark Thirty although I didn't enjoy it as much as that one. It is a very good film and gripping at times but at 2 hours and 13 minutes it drags a bit in places. Hanks is, as always, masterful but really comes alive in the last half hour. The performance to watch here though is by a first time actor named Barkhad Abdi, who plays Muse the "captain" of the Somali pirates. Both terrifying and revealing.

Next up and probably of most interest here to BV readers is the new film from the Coen Brothers, Inside Llewyn Davis, making its U.S. premiere at the fest. While it is a fictional story, it takes its heart from the autobiography of Dave Van Ronk, "The Mayor of Macdougal Street", a must read for anyone interested in music. The movie is set in one week in the winter of 1961 following the life of LLewyn Davis, an earnest singer trying to navigate the folk scene and his own misfortunes in NYC and beyond, before the likes of Bob Dylan would show up soon after and explode it into something else entirely. I walked out of this yesterday liking but not loving it. It has all the trademarks the brothers are known for. Music wise, they are again working with T Bone Burnett as they did in O Brother Where Art Thou of which this film shares a lot of similarities, and like that film has some really amazing songs and music filled set pieces. It should make Sunday's tribute show at Town Hall a real treat. It is beautifully shot all in NYC. It is filled with quirky and wonderful supporting characters including Coen mainstay John Goodman playing an acerbic jazz musician junkie. F Murray Abraham, a Chicago club owner that bears a striking resemblance to the notorious Albert Grossman, Adam Driver from Girls as a cowboy hat wearing singer named Al Cody who is a dead ringer for Ramblin' Jack Elliot. Justin Timberlake and Carey Mulligan as folk duo Jean and Jim. Oscar Issac, who plays the lead character, is a fine upcoming actor who also played in a Florida based ska/punk band called The Blinking Underdogs. His performance as with all the performances in the film are just great to watch. My not loving the film came from what I thought was a thin story but truth be told, as I have thought about the film hours after, it has grown on me immensely. Needless to say I can't wait to see it again.

--
Speaking of great performances, you will be hard pressed to see a better acting turn than the one given by Scott Haze in the film Child of God. Directed with style by the ever present James Franco (seriously what does this guy not do?), it is an adaptation of a novel by Cormac McCarthy. It tells the story of Lester Ballard, an outsider desperately living along the backwoods of Tennessee. A character inspired by the 1950's killer Ed Gein who was also the model for Psycho and The Texas Chainsaw Massacre. It is a stark, crazy and often beautiful film that pulls no punches much like McCarthy's novels. With references to necrophilia, it is not a light day out at the movies. I was blown away by Haze's performance. It's remarkable and one of the best acting performances I have seen in years, He will be seen again in Bukowski, Franco's upcoming film about the early years of the celebrated writer/poet.

Moving on to lighter fare, there is Richard Curtis's absolutely charming, funny and sweet film About Time. Curtis wrote some of the great British TV shows of all time like Not the Nine O' Clock News, Blackadder and Mr. Bean then went on to pen some films you may know such as Four Weddings and a Funeral and Bridget Jones Diary. This is the third film he has written and directed after Love Actually and last year's Pirate Radio. If you know those films you have an idea of what you are getting here. With Domhnall Gleeson, all grown up from the Harry Potter films, and Rachel McAdams it is a story about finding love and meaning in our lifetime with the added bonus of time travel. I won't give anymore away but if you want a date movie with charm, class and wit then this is for you.

Staying with the somewhat lighter theme, there is Roger Michell's Le Week-End. It is basically two of the great modern day British actors, Jim Broadbent and Lindsay Duncan, playing off each other as an elderly couple spending a weekend in Paris in an attempt to spark up their relationship. With more than a few nods to the aforementioned Godard, including a lovely play off of the famous dance scene from Bande a part (Band of Outsiders). It is a bittersweet and sometimes very funny film although talky and not everyone's cup of tea 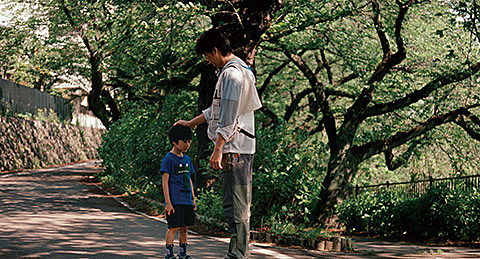 Next up is the Japanese film Like Father, Like Son, directed by Hirokazu Kore-eda who has helmed a number of films worth your time such as I Wish, Nobody Knows and the moving After Life. Once again masterfully working with children, this tells the story of a somewhat stubborn man, played by the Japanese pop star Masaharu Fukuyama, and his wife who find out that their 6 year old son was switched at birth with another family's. Trying to decide on choosing the boy you have raised for 6 years or your natural child, it is a heartbreaking and very touching film. It was easy to see why audiences at Cannes went nuts for it and why it won this year's Jury Prize.

Another Asian film that played at Cannes and was very well received is the new work from Jia Zhangke called A Touch of Sin. Telling 4 different but interconnected stories, it presents a look into the rise of violence in modern day China. Thoughtful and slow with sudden moments of explosiveness, it is very Tarantino like. It is one of my favorites of the festival so far. If you see it and like it, I recommend you seek out anotherof the director's film. Still Life from 2006 which won that year's Venice Film Festival. 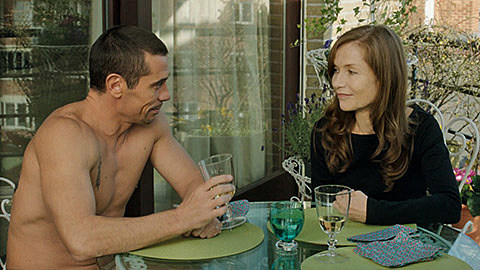 Catherine Breillat, the often controversial French director, is back at the festival this year with Abuse of Weakness. As with many of her other films, such as Romance, Fat Girl, Sex is Comedy and Anatomy of Hell, this is a semi autobiographical, deconstruction of gender politics. The always fantastic Isabelle Huppert plays Maud a director who suffers a stroke and while trying to make another film is taken advantage of by a con artist Vilo, portrayed by French rapper Kool Shen who she desires to have be her lead. Much of what comes from this film has its basis on Breillat's experience with her 2004 stroke and subsequent dealings with the thief Christophe Rocancourt who swindled her, among others, out of a million dollars. While I really have enjoyed some of her other films, this one is an interesting study, but not one of her best. 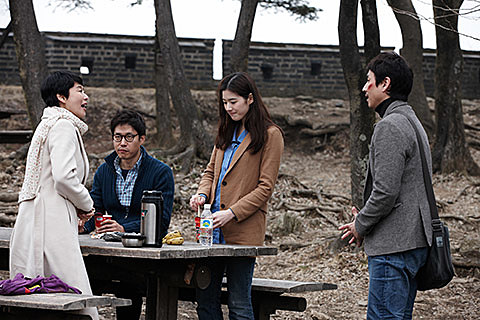 There is something always so simple and deceptive, as well as repetitive, about the films of the Korean director Hong Sang-soo. That continues with his new film Nobodys Daughter Haewon. What seems like a simple story about a young adult girl dealing with her mother leaving along with the illicit and confusing relationship she is having with her teacher is anything but. His usual themes of disconnection, confusion and again gender politics or more like mistakes are on display although this one is more female centered which differs from his previous work. The story is told through long set piece conversations between the actors. The minimalist style with much use of medium to long shots and the out of place zooms that seem to come out of nowhere are all here. Really enjoy his films but they all are connected so do yourself a favor and seek out his older ones. Plus how can any film with a cameo from Jane Birkin be bad?