Thurston Moore at MHOW in May (more by Dana (distortion) Yavin) 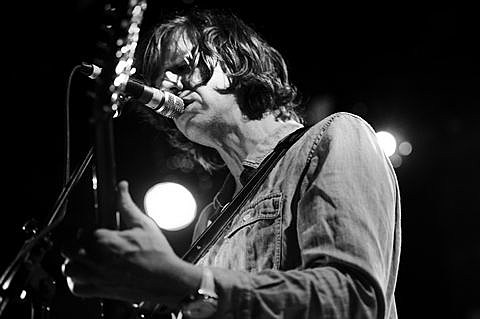 New York Guitar Festival have added some new shows to their initial lineup for this January, which included shows at the Merkin Concert Hall. They've since added a 30th anniversary celebration of Brian Eno's Apollo: Atmospheres and Soundtracks at the World Financial Center Winter Garden on January 6. The show will be a a rendition of Eno's album by the Brooklyn ambient ensemble itsnotyouitsme and guitarist Larry Campbell with special guests Noveller and Jeff Parker (of Tortoise).

They've also added the Alternative Guitar Summit, which will take place at LES venue Rockwood Music Hall from January 13-15. January 13 will feature performances by Pillow Wand (aka Nels Cline and Thurston Moore, Ben Monder and Pete Rende playing the music of Jimmy Webb, Joel Harrison and Anupan Shobhakar, and Mark Stewart and Gyan Riley (1/13 tickets). January 14 includes Liberty Ellman and Vijay Iyer, Dave Tronzo and Jay Granelli, and Knox Chandler (1/14 tickets), and January 15 will bring a number of musicians together to honor Jim Hall, including Nels Cline, Chris Potter, Scott Colley, Trevor Dunn, and others (1/15 tickets). You can also purchase a 3 night pass to all of those shows.

On January 29, NY Guitar Fest will hold a day-long guitar marathon at the 92nd Street Y celebrating Italian guitar music with a number of different performers. Tickets are on sale now.

Speaking of guitarists and lists, Rolling Stone recently issued their list of the 100 Greatest Guitarists of All Time, as voted on by other guitarists. Thurston Moore, who plays NY Guitar Fest (and is touring in February), made the list. Nels Cline, who Thurston is performing with, made it too. Though aside from a few others (J Mascis, Jonny Greenwood, Jack White) the list is pretty much what you'd expect it to be.