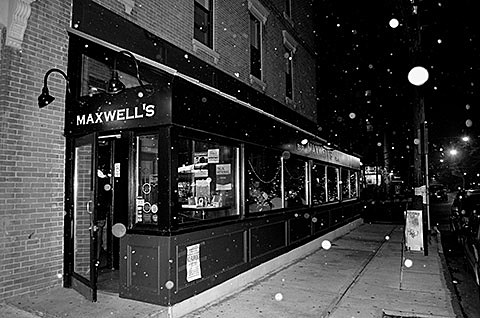 Jon Langford, the Mekons: Unusual things always happened at Maxwell's. One night, I fell asleep onstage. I was tired and drunk, and in the middle of a long jam, I laid down for a nap. It was very restful. I was comfortable there--too comfortable.

Bob Mould: After Hüsker Dü broke up, I moved to Hoboken in the summer of '89, because that's where Steve lived. And the first post-Hüsker Dü show I played was at Maxwell's. I started hyperventilating before the show, because I was so nervous. Steve brought me an oxygen mask.

Steve Shelley, Sonic Youth: I saw ­Nirvana as a four-piece in 1989, not long after I'd seen Mudhoney. I remember thinking, "These guys are pretty good, but they're no Mudhoney."

David Cross, comedian: You want the pee story, right? I was at Maxwell's with my then-girlfriend, Sarah, enjoying myself, when somebody spilled something on the back of my leg. But they kept spilling it. And I realized it was warm. So I turned around, and there was a guy peeing on me.

Legendary Hoboken indie rock venue, Maxwell's, is in its final week and, as tribute, New York Magazine this week offers up a very entertaining oral history of the club.

Here's the rundown of shows for Maxwell's last seven days in existence:

Saturday (7/27), in the afternoon there's a live broadcastWFMU's Cherry Blossom Clinic at 3 PM featuring a live performance from late-'60s cult band Hackmore Brick, whose 1970 album, One Kiss Leads to Another, owes more than a little to the Velvet Underground. That show is FREE.

Then Saturday night its Bambi Kino, a very high concept Beatles tribute band, dedicated to the band's formative days when they were living in Hamburg, Germany. They do the covers that The Beatles did back then. Making things a little more interesting is who's in the group: Doug Gillard (Ex Guided By Voices), Mark Rozzo (Maplewood), Ira Elliot (Nada Surf), Erik Paparazzi (Cat Power). Tickets are $5 and still available.

On Sunday (7/28), Mission of Burma are doing two shows: the late show is sold out but you can still get tickets to the early one (6 PM).

And the final night of Maxwell's (7/31) is the farewell block party with a live performance from The Bongos inside.