March is consistently one of the most insane months for shows, due to nearly every band being on tour thanks to SXSW. The flood doesn't really kick in till next week, so view this weekend as the relative calm before the storm. Also, before we get into my recommendations, I'd like to mention that New York Noise, the NYC-TV show that has been documenting the local indie scene for eight seasons, is in danger of cancellation. Given it's new Tuesdays at 5AM slot (and its showpage on the website now gone), it almost might as well be off the air -- a worse fate than 120 Minutes ever saw. There are so few outlets to watch music videos on actual television anymore, let alone ones from semi-obscure indie rock bands, and even less done in such consistently clever, funny, fresh ways. (Breakfast at Sulimays was not the first to interview old people about indie rock.)

Music is a huge part of New York City culture and surely the only show on the air about it deserves to continue. If you feel the same way I urge you to sign the Bring Back New York Noise petition. You can read more about it and what's going on with the show over at the Village Voice. And there are some highlights from the show at the bottom of this post. 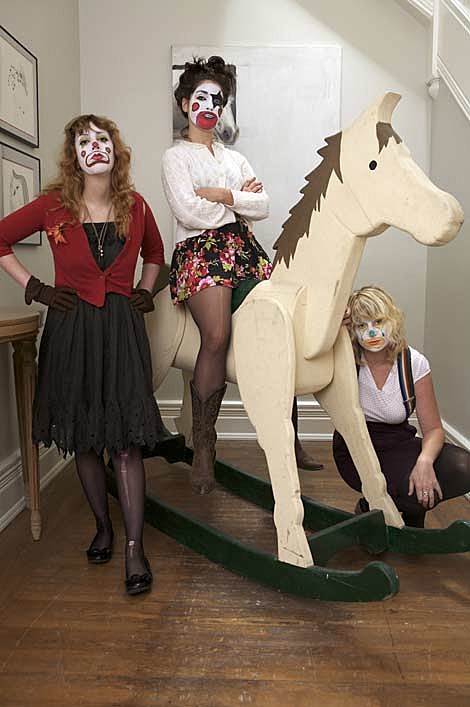 Ok, back to the music. San Francisco's The Sandwitches are visiting this weekend for three shows before heading off on a tour that will lead them to Austin for SXSW where they'll play more than a few parties including the BrooklynVegan Thursday day party.

They play the Rockstar Bar tonight (3/5) and then Monster Island on Saturday (3/6) with Golden Triangle.  Singers Heidi and Grace both spent time in The Fresh & Onlys and drummer Roxy used to be in Brilliant Colors. Like Donnie & Marie, they're a little bit country and a little bit rock and roll. In a San Francisco indie sort of way, which means a fair amount of reverb.

Kelley Stoltz says of the Sandwitches: "Imagine a 60's Girl-group is on tour and their van breaks down near a gothic castle high on the hill, Dario Argento invites them in to perform a concert for his tweaked actors in a big dark red room inside and, if the dream is right, it's the Sandwiches - they'd fit right in with those misfits and speak the same language. I'd like to be there to dance." I'm not sure I can top that description. I like their album, How to Make Ambient Sadcake, quite a bit and you can download opening track "Back to the Sea" at the top of this post.

After SXSW they'll play Todd P's MtyMx festival and then tour back to San Francisco with Thee Oh Sees and The Baths. 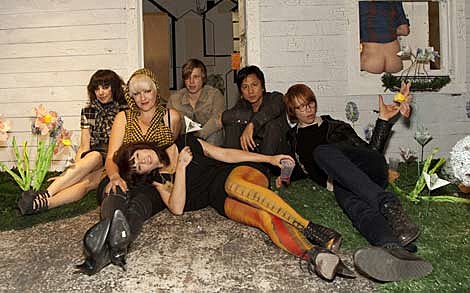 That Monster Island show on Saturday is the official record release party for Golden Triangle's debut, Double Jointer, which came out this week on Hardly Art. You can check out two songs from the album at the top of this post. I think you either like this sort of fuzzed out, reverb-soaked garage rock or you don't, but this record is a lot of fun -- a psychedelic art school party band that's part B-52's, part paisley underground, part Cavestomp.

Saturday should be a fun one, with an almost all-girl lineup. In addition to the Sandwitches, there's Girls at Dawn and Coasting, all of whom I like. Golden Triangle are also playing a lot of shows during SXSW including the same Thursday BV show as Sandwitches. All dates are at the bottom of this post. 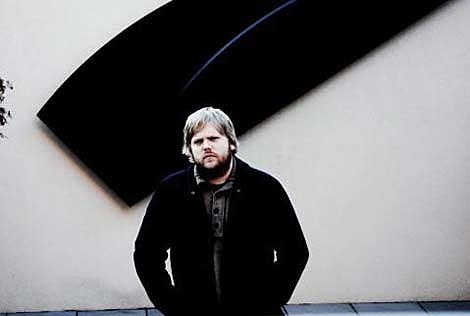 Playing together two nights this weekend are Washington D.C.'s Title Tracks and Boston's Pretty & Nice. They play Saturday (3/6) at Union Hall and then Sunday (3/8) at Cake Shop.

As mentioned before, Title Tracks is the new band from John Davis, previously of much-loved Q and Not U, and the great but unfortunately shortlived Georgie James. That said, Title Tracks' just-released debut, It Was Easy, is pretty great, full of guitar-centric power pop in a late '70s style that might bring to mind Rockpile, Marshall Crenshaw or the dB's... or more recently Sloan and the New Pornographers. Two songs are at the top of this post. Davis is a fantastic songwriter (and performer) and while we may miss his previous bands, be glad he's still cranking out great tunes. 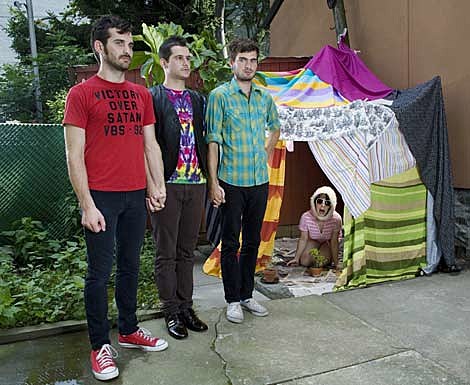 Pretty & Nice's music tips just the other side of 1980, with slightly nervier pop (XTC and Chris Stamey's songs with the dB's being obvious influences) but just as catchy and their 2008 album, Get Young, didn't get enough attention I don't think. Hopefully they've got a new album out sometime soon and we'll hear songs from it at one of the shows. They're fun live.

The Sandwitches at Cafe du Nord

Title Tracks : Piles Of Paper from John Davis on Vimeo.