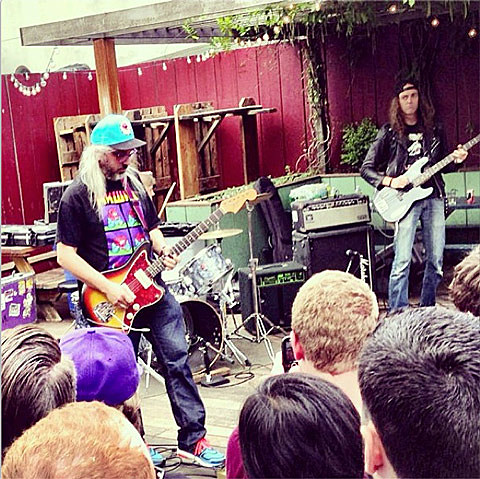 The long Labor Day Weekend (8/29-9/1) is upon us already, which for many is one last chance to enjoy the freedom of summer. It's a good time to get away for a weekend, but if you're staying in NYC for it, there's plenty to do here as well. We've put together our top 10 live music options going on in NYC during Labor Day Weekend, and you can check those out below...

'RIOT ON THE DANCEFLOOR' SCREENING: Thursday is basically the weekend so why not start off your weekend at the BV-presented NYC premiere of City Gardens documentary, Riot on the Dancefloor at the Loews Village East cinemas? City Gardens booker/DJ Randy Now, Gibby Haynes (Butthole Surfers), John Joseph (Cro-Mags) and Howie Abrams (In-Effect Records), Sim Cain (Rollins Band), director Steve Tozzi and more will be on hand to discuss the film and the legendary NJ rock venue after the film. Tickets are still available. After that, everybody's heading over to Bowery Electric for the afterparty where Gibby will be DJing. The afterparty is free, so even if you can't make the movie, please come by for that.

JOANNA GRUESOME / BIG UPS: For some Friday night fun that won't cost you anything, head to the South Street Seaport where the final Seaport Music Festival show of 2014 goes down. It's an excellent lineup of the UK's twee/punk-inspired Joanna Gruesome and Brooklyn's '90s post-hardcore style Big Ups, both of which are great on record but they really shine in a live setting. This is an early show (over by 9) so you'll have time to hit other places afterwards too. On a related note, you can also catch Joanna Gruesome with Perfect Pussy, Potty Mouth and The Love of Everything at Shea Stadium tonight (8/26), and half of that lineup (Perfect Pussy and Potty Mouth) in Asbury Park on Friday.

MODERN LIFE IS WAR: For another way to get your punk fix on Saturday night, head to Bowery Ballroom where melodic hardcore greats Modern Life Is War are playing one of their few Northeast shows this month. MLIW's initial run as a band in the early-mid 2000s inspired many of today's great post-hardcore bands, and 2013's comeback album, Fever Hunting, showed they've still got it as much as any of the bands that came in their wake. Great openers too: heavy shoegazers Nothing, DC punks Give, and Iowa psychedelic band Land of Blood & Sunshine.

WARM UP AT MOMA PS1: During the day on Saturday, you can head to MoMA PS1 in Long Island City for the second-to-last Warm Up of the summer. As always, the lineup is stacked with forward-thinking electronic music, this time from Benji B, Dam-Funk, DJ Marfox, Tessela, Dutch E Germ and Avalon Emerson. You can still get tickets.

HEAVY BLANKET AT SUMMER THUNDER: On the opposite end of the day show spectrum is the final "Summer Thunder" show at Union Pool of the year. It's a good one though, with J Mascis' psychedelic blues jam project Heavy Blanket headlining. You may remember -- and maybe your ears are still ringing from it if you were there -- that Heavy Blanket played Summer Thunder last year and got shut down by the cops after 15 minutes of wailing for being too damn loud. How long will they make it this year. Show up early to catch newish local psych-garage act Honey. Free.

CROCODILES / SISU: Looking for a Sunday night (8/31) garagey/gothy option? Head to Baby's All Right that night to catch Crocodiles who just put the finishing touches on their new album. It's a family affair kind of night, with opening slots from SISU (featuring Sandra and Jules of Dum Dum Girls) and Young Boys who are signed to Crocodiles/DDGs-owned label, Zoo Music.

MADE IN AMERICA PHILLY: If you want to get a little out of NYC, there's a ton of great music at the Philly edition of Jay Z's Budweiser Made In America Festival, which takes place Saturday and Sunday. The multi-genre festival's got hip hop from Kanye West, De La Soul, Danny Brown, YG and more; big-name indie from The National, Spoon, Grimes and more; punk from Pissed Jeans, Glassjaw, Nothing, The Menzingers and more; dance from Baauer, Girl Talk, Chromeo, Holy Ghost and more; and still plenty of others.

FOOL'S GOLD DAY OFF: If you're looking for some all-day fun on Labor Day proper, the annual Fool's Gold Day Off, happening at outdoor Williamsburg venue 50 Kent this year, should quench that thirst. As usual, it's a stacked lineup of electronic music and hip hop, headlined by the great Danny Brown (playing for his third year in a row). Also on the bill is veteran NYC trio The LOX (aka Sheek Louch, Styles P and Jadakiss), upcoming Queens crew World's Fair, hotshot producer AraabMuzik and plenty more. Tickets are still on sale.

VANIISH: And you can finish up your holiday weekend -- if you're not wiped out -- with an evening of goth and shoegaze at Glasslands on Monday night (9/1). San Francisco's VANIISH (members of Wax Idols and Soft Moon) are playing their first of two NYC shows this night, with Christines, INTERVAL and Winkie, as well as Weekend's Shaun Durkan on DJ duty (tickets).

Whatever you end up, have fun and be safe!