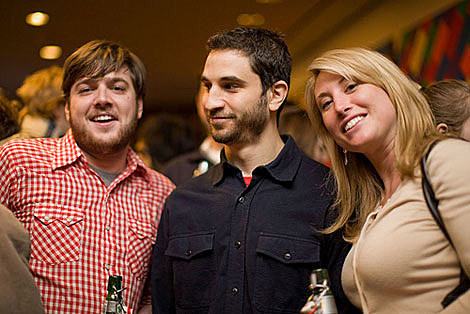 I don't get to see nearly as much comedy as I used to, but the scene is as vibrant as ever. If the mood strikes and I find myself wanting to get my yuck-on there is absolutely no shortage of one-off shows and recurring weekly shows. The Tribeca branch of the 92nd St Y has been booking some insane comedy shows recently. I caught Zach Galifianakis there a few weeks ago and was mightily impressed by the performance space and the insane, reasonably priced beer list at the bar. Sound Fix in Williamsburg has free comedy every Wednesday and Thursday. Joe Mande and Noah Garfinkle host Totally J/K every Wednesday at 9:30pm, while Max Silvestri, Gabe Liedman and Jenny Slate host Big Terriffic at 8:00pm on Thursdays. These shows fill the void left by the demise of Rififi and its staples Invite Them Up and The Greg Johnson & Larry Murphy Show by attracting big names like Zach Galifianakis, Sarah Silverman, Janeane Garofalo, Todd Barry, Eugene Mirman, and zillions more. Speaking of Greg Johnson, he's got a free show every Sunday at Pianos. And speaking of Invite Them Up, former host Bobby Tisdale now has a semi-regular, RSVP only show happening in Greenpoint called Wards of Merkin. It's usually $10 and there's usually free booze and top shelf comedians. And don't forget that the UCB Theater and The Pit have calendars bursting with options as does Comix's underground lair Ochi's. And that's just barely scratching the surface of the goings ons. Below are some shows currently on my radar...

1/28/09, Caroline's: Louis CK PS3 Benefit: Louis CK is doing an hour of all new material. All proceeds from the show go to PS3, his daughter's school.

1/29/09, UCB Theater: The Shits of Our Lives: Some of comedy's best storytellers gather 'round to discuss shit-related experiences. Featuring Chris Gethard, Anthony Atamaniuk, Curtis Gwinn, Matt Chipman, Joe Mande, Noah Garfinkel, Dave Hill, and Donald Glover. I will be surprised/pissed if this doesn't sell out.

2/10/09, The Bell House: The Will To Whatevs Book Release Party: Our man Eugene wrote a book. This book release party at the Bell House will feature Kristen Schaal, John Oliver, John Hodgman, Paul F. Tompkins and many surprises. You'll be able to buy the book and have it signed too (tix).

2/16/09, UCB Theater: Inside Joke: Janeane Garofalo: Inside Joke is one of my favorite shows out there. It's been too long since the last one. This will sell out.

2/21/09, UCB Theater: Marc Maron: SCORCHING THE EARTH: Marc unloads about being left by his second wife. Another one of my faves, Maron expertly uses rage and neuroses to pour his guts out all over us.