Halloween is upon us and NYC really loves to get into the spirit. With it falling on a Wednesday this year, it means there are two Hallloweekends, before and after, though most of the action is this weekend. As always, the biggest event of the season is the 45th-annual Village Halloween Parade, which takes place on October 31 from 7:00 PM – 11:00 PM. Anyone can march in the parade but in order to participate, you must be in costume, and arrive at 6th Ave at Canal St. beginning at 6:30 PM. This year’s theme is “I AM a Robot!” and this year there's a special $25 VIP section for those who dress in theme:

Your $25 advance ticket buys you a secret entry point for early admission and no lines, a special DJ and soundtrack for an In-Parade party, TV coverage and the chance to meet other Robots like yourself!!!

As usual, there are a million Halloween events, parties and shows to choose from. This year, we just picked what we thought were the most notable. There are also lots of great options that aren't specifically Halloween-themed. Check out our daily What's Going On? posts for the night's most notable shows, and consult our NYC Show Calendar for even more.  Our daily Halloween show pics are below.

Coven, Sanhedrin @ Le Poisson Rouge
Halloween weekend shows often have cover sets or costume parties, but if you want to go to a show where the actual music is spooky, Coven is a great choice. The occult rock legends reunited last year for their first US show in 27 years, and now they're finally playing NYC. Their classic debut album Witchcraft Destroys Minds & Reaps Souls sounds as evil today as it did in 1969 (which was one year before the debut album by masters of evil Black Sabbath, and also it might be worth noting that this album has a song called "Black Sabbath" on it).

Witch Taint, Voice of Doom at Lucky 13
In 2004 comedian, musician and BV contributor Dave Hill created alter-ego Lance, a teenager living with his parents in Gary, IN who also happened to be the lead singer and sole member of “the most extreme, brutal, and Satanic black metal band of all-time.” That band, Witch Taint, play this show with "NJ's legendary horror punk band" Voice of Doom.

'Suspiria' Costume Party at Videology
Dario Argento's '70s horror classic (and not the just-released remake) is the inspiration behind this costume party where Videology will transform into the Tanz Dance Academy of Freiburg, with inspiration coming from the vivid colors of the film. There will also be witches, ballet dancers, and more. Sadly, this is the last night of operation for the Williamsburg screening room, bar and DVD rental store which closes after 15 years.

Halloween at the Black Lodge with A Place Both Wonderful and Strange, Fuck You, Tammy!, knifesex, Liberty Rose, Winkie, Del Judas @ Elsewhere
Twin Peaks-themed group A Place Both Wonderful and Strange's "Halloween at the Black Lodge" has become an annual tradition with a host of acts (including one, Fuck You, Tammy!, that was clearly inspired by the most recent season).

The 28th Annual Tompkins Square Halloween Dog Parade and Chi-lloween 2018 @ East River Amphitheatre
While it's not actually in Tompkins Square Park this year, the much-loved Dog Parade is back after almost not happening. If you can't make it in person -- it's from noon to three -- it will be broadcast on ESPN.

Wavves, Beach Fossils, Kevin Krauter @ Elsewhere
Beach Fossils threw a very fun Halloween party at Brooklyn Steel last year, and this year they're back, with Wavves in tow, for two spooky nights at Elsewhere. Kevin Krauter, formerly of Hoops, opens both nights and Halloween night also doubles as Elsewhere's one-year anniversary party (more on that below).

GWAR, Miss May I, American Sharks @ Irving Plaza
If you're looking for a concert to see on Halloween, what better band than a band who wears costumes and sprays the audience with blood on any night of the year? Irving Plaza hosts 'GWARoween PT II “The Bloodening'” on Halloween night, and while we can't know for sure which one will be the best, it feels safe to assume that this one will at least have the most amount of beheadings.

Cypress Hill "Haunted Hill" @ Gramercy Theatre
Hip Hop vets Cypress Hill just released a new album, and now they're set to come back to NYC for one of their annual Haunted Hill shows (which they've been doing for over 20 years) with promised "Special Guests."

Deafheaven, DIIV, Ionna Gika @ White Eagle Hall
Deafheaven, DIIV, and Ionna Gika (of IO Echo) all make the kind of dark, gothy music that sounds great every night of the year but should especially work well on Halloween. Some of these shows will have crowds dressed in wacky costumes, but we suspect this one may have everyone dressed in all black.

Flyers for a few of the shows and parties are below. 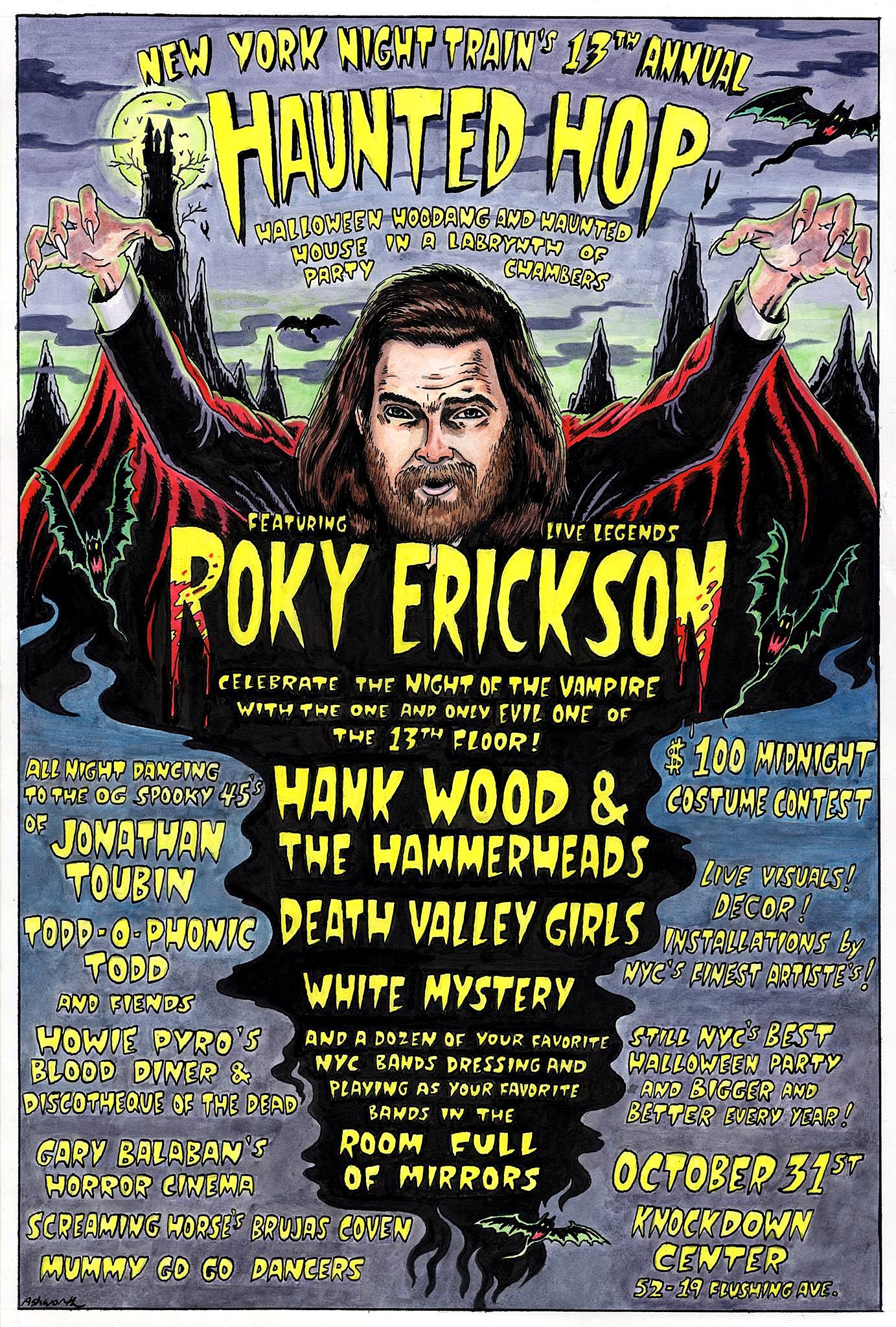