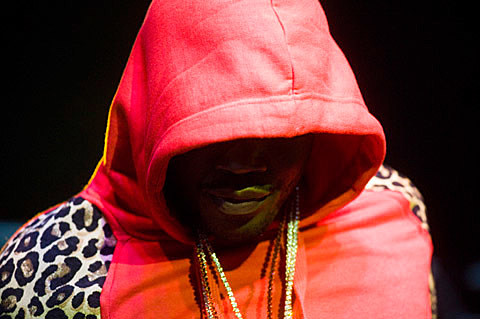 There's never a lack of great hip hop shows happening in NYC. Today alone, we posted about Ratking (with Trash Talk), Dipset and Action Bronson so far. Here's a roundup of a few more:

Meek Mill, whose 2013 appearance at Power 105.1 Powerhouse saw him bring out Nicki Minaj, whose new album he appears on and who he might be dating, will return to NYC for a Power 105.1-presented show on February 12 at Best Buy Theater. Tickets are on sale now.

Smoke DZA, who already has a Studio at Webster Hall show (1/25) coming up, plays NYC two days earlier than that as well with DARK and Sonnie Carson at The Wick (1/23). Tickets are on sale.

An all-female lineup of Nitty Scott MC, Celeste and Chelsea Reject takes place that same weekend on January 24 at Acheron. Tickets are on sale. Nitty appears on the new single by LoVel, "College," which just got the video treatment today (dir. Llama). You can watch that below.

Another NYC female rapper, Junglepussy, was added to the previously-discussed Father show happening January 22 at Baby's All Right. That show is also with Glass Gang, and tickets are still available.

And one more: Awkwafina plays SOB's on February 16 with Lyricks, Rekstizzy, Decipher aka Danny Chung, Mike B and DJ Zo. Tickets are on sale.

The always-great Curren$y returns to NYC on March 5 at BB King's. Tickets for that show go on sale at noon on Friday (1/16).

Slaughterhouse's Joell Ortiz teams up with past collaborator Akon to honor the tenth anniversary of the murder of Akon's manager, Robert 'Screw' Montanez, on January 30 at Stage 48. Tickets for that are on sale.

California's Iamsu! and Atlanta's Rome Fortune are heading out on a tour this spring which hits NYC on April 24 at the Marlin Room at Webster Hall. Tickets for that show are on sale now. All dates here.

Wiz Khalifa's been making an annual thing out of going on summer amphitheater tours, and 2015 will be no exception. But while these tours are usually with cool rappers like A$AP Rocky, Joey Bada$$ and Smoke DZA or Jeezy, Ty Dolla $ign and Rich Homie Quan, this year it's with, uh, Fall Out Boy. If you're into that sort of thing, you have a few chances to see it in the NYC-area including Susquehanna Bank Center, PNC Bank Arts Center and Jones Beach. Tickets go on sale at noon on January 23.

Lastly, though he has no NYC date announced at the moment, Australian rapper REMI has announced he'll make his US debut at SXSW this year. You can get a taste of his quality avant-rap from the video for "Tyson," below. Hopefully he decides to hit NYC too while he's here.