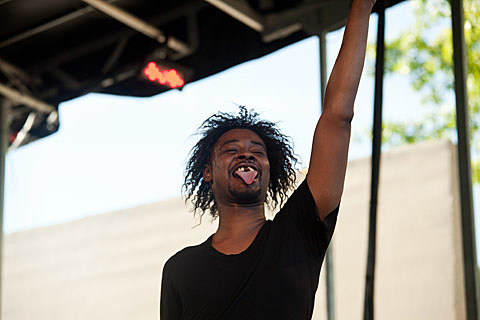 Even though the season doesn't official end until September 21, Labor Day (9/2) is generally seen as the end of summer and the last chance for NYers to get out of town and relax. Mind you some people find a half-empty city just as relaxing as a beach, and for those who will be in town this weekend there are lots of live music options. Head below for our Top 10 Labor Day Weekend music picks...

1) The biggest (and best?) Fool's Gold Day Off yet happens this year. The label's free Labor Day show has moved from the City Winery backyard to the much larger Wiliamsburg Park and the stacked lineup includes Danny Brown, Run the Jewels (aka Killer Mike and El-P), Migos, A$AP Ferg, World's Fair, Party Supplies, and more. They're promising "special guests" too. RSVP is now closed but even if you already did it, still show up early (2 PM start) because it's first come, first served. And to keep the party going all night, Fool's Gold Night Off starts at 11 PM (10:30 doors) at Brooklyn Bowl, hosted by Bodega Bamz with DJ sets from Sammy Bananas, High Klassified, Roofeeo, and Illuminati Ams (tickets).

2) During Memorial Day Weekend there was the DFA Anniversary Party and for Labor Day, another local label is celebrating a milestone: Brooklyn's Captured Tracks is five years old. The label has corraled most of its roster for a two-day CT5 celebration at The Well (8/31, 9/1), including performances by Mac DeMarco (who also just played a Summerstage show), DIIV, Wild Nothing, Blouse, MINKS, Beach Fossils and more. Tickets are still available. Blouse also play a CT5 kickoff party at Glasslands on Friday (tickets) and you can hear their album at a free listening party tonight (8/29) at the Seaport.

3) Speaking of anniversaries, Brooklyn's Issue Project Room is celebrating a decade of experimental, avant-garde and generally eclectic programming with a two-month festival called Ten Years on the Infinite Plain. It kicks off Saturday (8/31) at Red Hook's Pioneer Works with a show featuring -- in what is now extremely timely booking -- Syrian musical legend Omar Souleyman, plus performances by Bobb Trimble's Flying Spiders, 75 Dollar Bill, and Steve Gunn. Tickets are still available.

4) Though there's obviously a lot of music we wouldn't see at Electric Zoo (and the name alone might leave a bad taste in your mouth), there's really enough good stuff each day to warrant spending your Labor Day weekend (or parts of it) on Randall's Island. On Friday, there's Baauer, Bondax, Four Tet, Cyril Hahn, Joy Orbison, Skream, Scuba and more; on Saturday there's Moderat, A-Trak, AraabMuzik, Chris Malinchak, Just Blaze, RL Grime and more; and on Sunday there's Diplo, who will be trying to set a world record for twerking this weekend. Check out the full schedule.

5) And with Electric Zoo going down, that of course also means afterparties! The two biggest standouts (to us at least) are Chicago house vet Cajmere at Cielo on Friday (tickets); and Modeselektor and Rudimental DJing Best Buy Theater on Saturday (8/31) with Delta Heavy (tickets. Williamsburg's new-ish dance club Output is also hosting parties every night from Dixon, Claude Von Stroke, Laurent Garnier, and more.

6) In addition to Friday night's appearance at Cielo, Cajmere will also be playing Saturday afternoon's Warm Up at MoMA PS1 with two pretty exciting live bands, Liars and IO Echo, in addition to artfully-minded producer Jon Hopkins and Sam Valentin IV (tickets). Keep the party going with Jon Hopkins later on at Cameo at midnight.

7) Union Pool's Summer Thunder series has been a constant Saturday afternoon option all summer long, providing varied, free outdoor entertainment in their taco-truck-equipped backyard. (The one with Pampers a couple weeks ago was especially killer.) This weekend's edition has been put together by drummer Ryan Sawyer and he'll play as part of an improv trio featuring trumpet man Nate Wooley and some dude named Thurston Moore. Lungfish's Daniel Higgs is on the bill too, and while this show may not be the most listener-friendly music, a chance to see two indie rock icons for free in a small space is a chance you may not want to pass up. 2PM, 21+.

8) Black Witchery may have a new guitar player, but that won't stop this war machine from pummeling the crowd at Saint Vitus on Saturday with the unstoppable Negative Plane in tow. Labor Day is historically for relaxing but with a bill like this, fuck it... let's rage. Tickets are on sale now.

9) Bat for Lashes is currently opening on Depeche Mode's tour, which will hit the NY area next week at Barclays Center and Jones Beach. But she'll be doing her own headlining show while here on Friday (8/30) at Webster Hall and tickets are still available. It's been a while since she's played NYC, her shows are usually theatrically entertaining and...that voice.

For a full rundown of everything that's going on this weekend, check out our daily What's Going On? posts and our NYC Show Calendar.