"Four sold-out nights in the New York area later, two of which I attended, Art Brut might be my favorite new act in years, even more than the Game or Tony Yayo." [Riff Raff interviewed Art Brut] 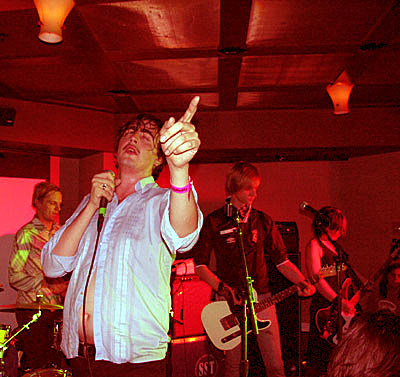 The verdict is in. NYC Loves Art Brut.

"Taking the stage around 11:30 PM last night, Art Brut launched into a note-perfect cover of AC/DC's Back in Black' [One Louder]

"Argos, despite his vocal limitations, is a very engaging frontman. He has exactly three power moves:..." [HEARTONASTICK]

"And then there's Argos, a classic ham of a frontman, a doughy ball of goofy, waterlogged charisma behind a John Waters mustache..." [Status Ain't Hood]

"Their music is so fucking catchy that you can't deny the attraction from the start." [Loose Record]

"Lead singer Eddie Argos is cheeky and self agrandizing to the point of spoof and then ultimately self depricating and funny as hell, he had the audience cracking up, 'Ready Art Brute?' he asks before each song." [A blog Called Nowhere]

"A bearded dwarf sporting a mohawk and wife-beater ruled the mosh pit during most of the show, but his attempts to treat the band to shots were unsuccessful." [Jeddeth]

"What a great show. Seemingly everyone in attendence not only knew the words to all the songs, but also brought their cameras..." [Sound Bites]

"In Brit-speak, this was a fookin' great show" [bolts of melody]

"...he said that they were looking for a deal for their record to come out in the U.S. (currently it's only available on the UK) and that's the reason they undertook this short U.S. tour." [Japanese God Jesus Robot]

"Let me say that new guitarist Jasper Future is the new indie-rock matinee idol I'll never be. guy is gorgeous (he's the blonde, obviously)." [dave should get out more]

"The Arctic Monkeys have chosen a terrible weak to debut in the U.S. Terrrrrible, I say." [Yeti Don't Dance]

* Check out my pics 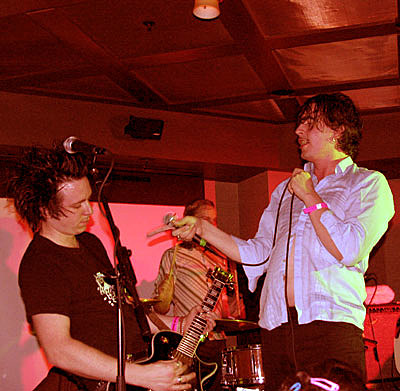 Sort of Unrelated: WTC Art Bruts May Claim Another Scalp