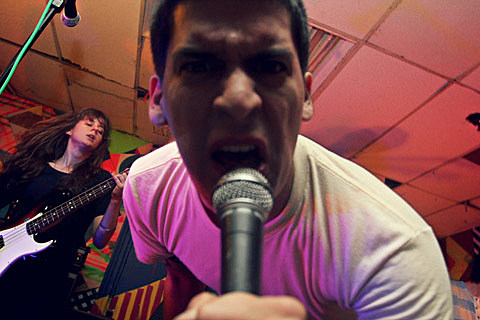 Memorial Day Weekend is coming up, and as usual there's no shortage of things to do. On the music front, if you'd like to get away (but not too far away) for the long weekend, there's a few good festivals. Headbangers may want to head to Maryland Deathfest for Agalloch, Crowbar, Gorguts, Ulcerate, and more. Or you can get your indie rock on at Boston Calling with The Decemberists, Death Cab for Cutie, Modest Mouse, Built to Spill, and more. Or maybe you're more the punk type and will head to Michigan for Bled Fest with Title Fight, The Menzingers, Self Defense Family, Frameworks, Little Big League and more.

If you're staying in NYC this weekend, there's plenty to do here as well. Head below to check our top 10 list of events going on this weekend...

1) It's no surprise the party will be going all night, every night at Williamsburg dance club Output this weekend, but there's some especially exciting stuff. Tonight (Thursday) there's a Simian Mobile Disco (DJ) show at the venue, and they're joined by a good lineup of Bicep, Daniel Avery and JDH & Dave P, plus Justin Strauss and L-Vis 1990 in the Panther Room. Then, to coincide with another Memorial Day Weekend event, Electric Daisy Carnival, there will be EDC afterparties and pre-parties from Friday - Sunday with multiple vets of NYC's '90s rave and club scene, including Frankie Bones, Lenny Dee and Francois K (Friday) and John Digweed, Alex Graham and Nicholas Matar (Saturday). Plus, there's plenty others from around the world. More info here.

2) If you're already familiar with Ex-Cult, you probably don't need this list to suggest that you go, but if you're looking to catch a band for the first time this weekend, these guys have got to be it. They have two NYC shows this week, including Mercury Lounge Fontana's tonight, but the show we recommend catching is Friday at Acheron. The punk-oriented venue will make this guys feel right at home.

3) Another punk option that's moodier and less confrontational is Denmark's Iceage whose tour hits NYC for a two-night stand this weekend. Sunday's show is the more intimate of the two, a Nothing Changes party at Home Sweet Home which also features the intense NYC goth punks Anasazi. Firs though, on Saturday they'll be at Glasslands, which may not have the packed-in, shoulder to shoulder crowd Nothing Changes likely will, but it'll be a great chance to check out Uniform, the new noise-driven duo of Ben Greenberg (The Men, Pygmy Shrews, Hubble) and Michael Berdan (Believer/Law, Drunkdriver, Veins).

4) Nashville's Pujol gets ambitious on his new album, KLUDGE, which flirts with '70s rock production that works more often than not. It's also a terrific batch of tunes, and he's got a lot more to say than most garage rockers. Live, Pujol are always wild force of nature and NYC has three chances to see him this weekend. Friday's show at Death by Audio finds him in his natural habitat, but it's hard to turn down a free show at Rough Trade on Saturday afteroon. Later Saturday night he plays Mercury Lounge, a bit uptight for him but hopefully openers Dirty Fences will loosen the joint up first.

5) With 22 albums (most of which have about 20 songs on them) and growing it's no wonder Guided by Voices shows often go to epic-length. Their sold-out show on Friday at Bowery Ballroom is in support of their kickin' new album, Cool Planet, that mines Bob Pollard's endless supply of hooky riffs. Opening is former GBV member Doug Gillard whose new album, Parade On, is punchy powerpop goodness. Sold out, but Bowery has released tickets a couple times this week so it might be worth checking the Ticketmaster page. They'll also be back in July.

6) If you'd like to kick off your weekend in DIY fashion, you'll want to head to Silent Barn on Friday, where there's two shows (early and late) which are $7 each or $10 for both. The early show (7 PM) is mostly in the world of twee pop and bedroom folk with Free Cake For Every Creature, Frankie Cosmos, Radiator Hospital, Quarterbacks, and Adult Mom, and the late show (midnight) leans more ambient with Ricky Eat Acid and Foxes In Fiction. Not a bad artist on either bill.

7) NYC public beaches open this weekend and even if it's maybe not warm enough to swim, an ocean view is always nice. Why not take in a show too? Saturday at Rockaway Beach Surf Club is a beach party with Australian psych band King Gizzard & the Lizard Wizard, Mystery Lights and DJ Jonathan Toubin. It's free (RSVP) and goes from 2 PM - 8 PM.

8) Wiliamsburg's iconic Domino Sugar Factor is sadly soon to be turned into more condos, but before it is we highly recommend you check out acclaimed artist Kara Walker's public project "A Subtley," the centerpiece of which is the 35-foot tall, sphinx-like Sugar Baby which is made from four tons of the sweet stuff. The installation runs weekends through July 6 and is open Fridays from 4 - 8 PM and Saturday and Sundays from noon - 6 PM. Free. Go see it if you haven't already.

9) On Memorial Day, there will be a block party to celebrate the part of West 77th St in Manhattan (between Riverside Dr and West End Ave) that's being renamed Miles Davis Way in honor of the legendary jazz musician. The block party runs from noon to 2 PM and is free and open to the public.

10) Green-Wood's Annual Memorial Day Concert goes down on Monday (5/26) at 2:30 PM with music from the ISO Symphonic Band. While this isn't the sort of thing we normally cover, any excuse to visit Brooklyn's amazing Green-Wood Cemetery should be taken, especially one that involves live music (though visiting when you have the place more to yourself is an even better experience).