enter to win tickets to see Pixies & TV on the Radio in NJ, at the end of this post... 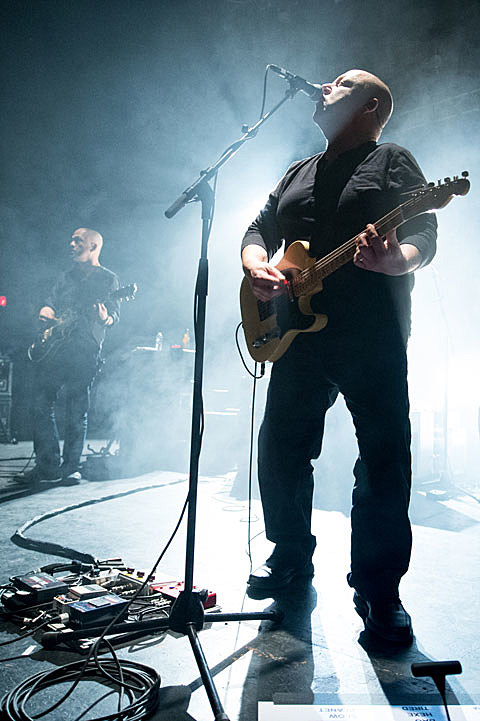 photo: Pixies in Northampton in 2014 (more by Dana (distortion) Yavin)

A couple good New York options that are just a few hours away from NYC are electronic festival Mysteryland, which happens at Bethel Woods Center for the Arts (where the original Woodstock took place) and has Diplo, Skream, Matthew Dear, Classixx, Dillon Francis, Empire of the Sun, Giraffage, iLoveMakonnen, Moon Boots and more; and there's the first free concerts of the summer at Montauk's The Surf Lodge. They have Mac DeMarco on Friday (5/22), Escort on Saturday (5/23), and Capital Cities on Sunday (5/24).

But if you'd rather stay in NYC for the weekend, there's plenty to do here as well. We've made a list of ten shows we think are worth seeing. Browse that list, along with a few honorable mentions at the end, below...

Brooklyn Night Bazaar's final shows -- Priests Friday (5/22) and Perfect Pussy Saturday (5/23)
It's the last-ever weekend for shows at Brooklyn Night Bazaar, the Greenpoint venue which hosts mostly free shows on weekends, as they're losing their lease at the end of the month. They're going out with a bang though: two killer punk shows. Friday has DC's political Priests, Canada's AmRep/Touch & Go-inspired Greys and more; and Saturday has the noisy Perfect Pussy, the Fugazi/Slint-ish Big Ups and more. Both are free.

Parquet Courts, Radioactivity, Pill @ House of Vans -- Saturday (5/23)
Part of HoV's "Almost Summer" series, this is a pretty killer free show, headlined by locals Parquet Courts, and also including Texas rippers Radioactivity and the sax-fueled, gleefully unhinged Pill. It's free and you can still RSVP.

Pixies, TV on the Radio, John Grant @ Stone Pony Summer Stage -- Saturday (5/23)
You'll have to get to Asbury Park for this one, but that's not too far from NYC and what better time to spend a day on the boardwalk before seeing a killer show than Memorial Day Weekend? This bill brings together indie legends Pixies, regulars of the mid-2000s Brooklyn scene (and still great today) TV on the Radio, and Czars frontman-turned-chamber folk solo artist John Grant. BrooklynVegan is proudly presenting this one too, AND you can enter to win a pair of tickets below..

Conan, Mantar, Black Pussy, Hush @ Saint Vitus -- Friday (5/22)
Liverpool's Conan have been putting out killer psychedelic doom albums for the past five years, with EPs dating back even further, yet they've never made it over to the US. Making this bill doubly exciting, it's got Germany's Melvins-y newcomers Mantar, who have yet to play NYC since the release of their debut album (or ever?). If you're into metal, you probably already know this show is not to miss, but if you're not, both Conan and Mantar appeal to fans of straight up rock too.

Samothrace, Unearthly Trance, Trenchgrinder, Beefrot -- Sunday (5/24)
Most of Conan's tour dates are with Seattle sludgesters Samothrace, but while they don't play the VItus show, they do hit that same venue as a headliner two days later. Samothrace's newest release is this year's Live At Roadburn album, which is worth picking up, but of course nothing beats actually seeing them live. This bill is also doubly exciting because it's the first date back for Brooklyn sludge faves Unearthly Trance since going on hiatus in 2012.

Condo Fucks (aka Yo La Tengo), Antietam, Speed The Plough @ Cake Shop -- Friday (5/22)
Cake Shop is celebrating its 10th birthday with some "super shows" on the weekends this month, and Friday (5/22) is indeed pretty super, with Yo La Tengo's cover-loving alter egos, Condo Fucks, playing the tiny stage. Also playing are two other long-running NY-area acts, Antietam and Speed the Plough. Advance tickets are sold out, but there might be some available at the door.

Vadaat Charigim, Wildhoney, Dead Heavens, The Cabana Kids @ Baby's All Right -- Friday (5/22)
Isreali's Vaadat Charigim just released their sophomore album, Sinking As A Stone, which has them stretching out their shoegazy compositions, allowing them plenty of space to drift on the breeze. Touring after Austin's Levitation, they're in town to play Baby's All Right on Friday with Walter Schreifels' garage/psych band Dead Heavens and Wildhoney which is a pretty great triple bill. If you want to make it a very Levitation weekend, you can also go see Chilean psych band Föllakzoid at Rough Trade on Saturday who play with SQÜRL.

Have a safe, fun long weekend. What else? Enter to win tickets: