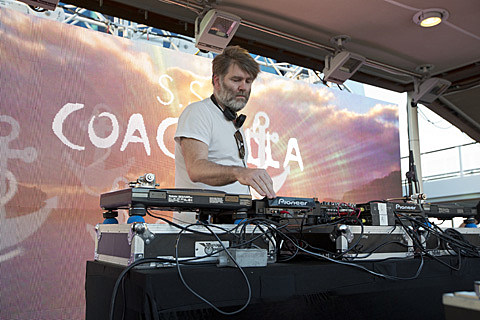 Staying in NYC this weekend? There's actually no shortage of things to do here, even though the weather forecast is less than ideal. Head below for our top 10 list of events going on this Memorial Day Weekend.

1) With nearly every active artist on their roster -- including James Murphy, Shit Robot, Factory Floor, and Juan Maclean -- performing in some capacity, coupled with the rococo bombast of Grand Prospect Hall, the DFA Records 12th Anniversary Party on Saturday (5/22) is pretty unmissable. (If you got tickets, that is.) Expect a never-ending stream of "I WAS THERE" jokes on Twitter. The only question that remains: how many discoballs will there be?

2) Soul reviver Aloe Blacc will be bringing his LA party "Do-Over" with fellow Do-Over residents Haycock and Strong to The Well on Sunday (5/26) as part of the Red Bull Music Academy. (If you were wondering whether The Well would be back this year, this answers that question.) The rest of the bill includes Emufucka (live),Trancemicsoul and "very special surprise guests." The show is free but RSVP is required.

3) Given that they've announced date, times and a King and Queen, it looks like this year's annual Coney Island Mermaid Parade is going to happen, but they still need help. Give to a worthy cause -- and one of the great NYC traditions -- by going to the Save the Mermaid Parade concert on Saturday (5/25) at Bowery Ballroom with Amanda Palmer and more. Tickets are still available.

4) Metallic hardcore vets Converge only have one Northeast date scheduled before their European tour besides the on-going Maryland Death Fest, and that's a NYC show at the intimate Brooklyn space Saint Vitus on Saturday (5/25) with Meek Is Murder, Trenchfoort, and Dead Serious. Needless to say, this one is sold out. They also just released an EP on bandcamp, which features 5 covers of Entombed's "Wolverine Blues" with different lead singers.

5) The Shins have been pretty busy on the road since the release of their 2012 LP, Port of Morrow, but it's been over a year since they were last in NYC, so their show this Sunday (5/26) at Williamsburg Park with Man Man should be one of the more interesting ones to catch this weekend, assuming the weather holds out. Tickets are still available.

6) Comedian Greg Proops is back at the Bell House on Saturday (5/25) for a live recording of his "Greg Proops is the Smartest Man in the World" podcast. Sez Klaus:

Most people recognize Greg as that one guy from the American version of Whose Line Is It Anyway who looks like he could be a sax player in a 3rd wave Ska band (as a matter of fact, host Drew Carey, at the time, looked like a trombone player of a 3rd wave Ska band). Greg's skills as an improv comic and a stand up comic are among the sharpest in the biz and I think he is criminally underrated, especially within the indie comedy community.

7) Green-Wood's Annual Memorial Day Concert goes down on Monday (5/27) at 2:30 PM with music from the ISO Symphonic Band. We wouldn't recommend this one necessarily if it was in any other location, but we'll take any excuse to visit Brooklyn's amazing Green-Wood Cemetary, especially one that involves live music (though going there to explore on a day when there's not a crowd may be even better).

8) Iceage's electronic-tinged side-project Var and Brooklyn noise artist Pharmakon both released new records last week (5/14) via Sacred Bones, No One Dances Quite Like My Brothers and Abandon, respectively. Both are great records, and you can see those two artists play a one-off show together on Saturday (5/25) at The Rink (67 West Street, 5th Floor in Greenpoint) with DJ Anthony Naples. Tickets for that show are still available.

9) Over for next weekend's NYC Popfest, arch, erudite UK indie legends The Monochrome Set will play their first NYC show in more than 30 years at Bowery Electric on Memorial Day (5/27). Tickets are still available. A truly underrated band from the post-punk era, The Monochrome Set have a few gigs while here. Make sure you make it to at least one of them.

10) And, lastly, if your interests lean towards the obscure, the droning and the noisy, you might want to head to the Ende Tymes Festival which goes on at Silent Barn all weekend (5/24 - 26).