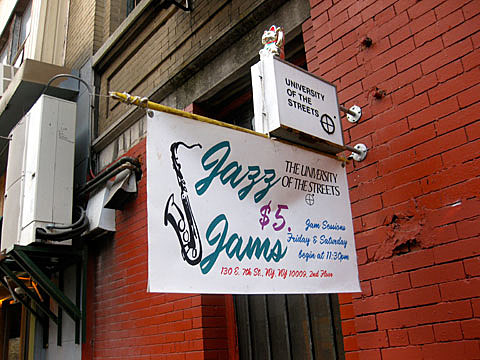 The announcement follows successful resolution of negotiations between the non-profit jazz venue's management and members of the University of the Streets Musicians' Committee, an ad hoc organization representing musicians who had played at University of the Streets and were participating in the boycott, and Local 802, AFM, whose representatives were present in support of the musicians' committee.

The boycott was called last September, after reports of a musician being injured during an altercation with a UOTS employee circulated widely through social media. The boycott also stemmed from musicians' concerns over what they considered a "pay to play" policy, in which the venue sometimes required bands to pay out of pocket to cover a guarantee in ticket sales.

In January 2012, the UOTS Musicians Committee contacted Saadia Salahuddeen, director of University of the Streets, with a list of grievances. These were resolved in a meeting on April 12, 2012, attended by members of the UOTS Musicians Committee, representatives of Local 802, Ms. Salahuddeen, and several members of the UOTS board.
As part of the agreement, UOTS will end the 'pay-to-play' policy, and will bar the employee involved in the altercation from the venue.

A statement issued by the UOTS Musicians Committee reads:

'We're extremely pleased that UOTS has addressed the musicians' concerns, and that both they and we can now get back to presenting and performing creative music in this historic venue. We wish the venue and the musicians who play there every success.'

"These musicians have shown again that collective action really works. Local 802 is happy to be here supporting working musicians in every part of today's scene."

Ms. Salahuddeen invites any interested musicians to join an advisory committee of musicians so that UOTS can work more closely with the local jazz and improvisational music community "to ensure more productive and positive relationships with musicians."