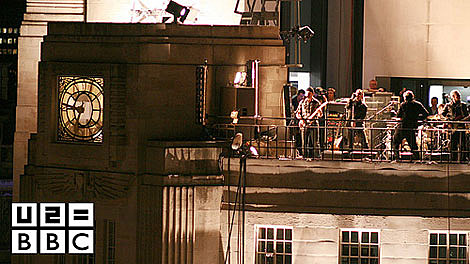 They've sung about a place "Where the Streets Have No Name," but Irish rockers U2 will have a street named for them in Times Square Tuesday.

Mayor Bloomberg is expected to rename part of W.53rd St. at Broadway "U2 Way."

The temporary street renaming coincides with the release of the band's new CD, "No Line on the Horizon," and the kickoff last night of their five-night gig on "Late Show With David Letterman."

Besides winning Grammys and being inducted into the Rock and Roll Hall of Fame, Bono and his bandmates are known worldwide for fighting for human rights and social justice. [Daily News]

U2 are really good at getting attention when they have a new album coming out. On Friday they played on a London roof. You can watch the whole thing at BBC's site. The first of five Letterman episodes aired last night. Today they get the street named after them. This coming Friday they'll be on Good Morning America (Bryant Park?), and then they'll play a show at Fordham University. Today is also U2 day on RXP.

U2 3 Nights Live will be delivered via satellite on ABC Satellite Services and Westwood One in the United States.

Each of those cities will also get a small club show.