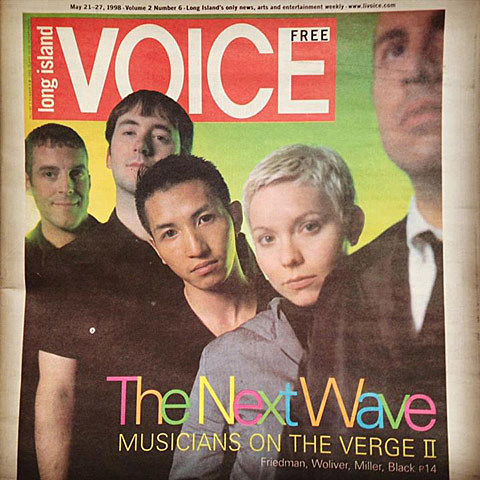 Night 2 of NYC Popfest happens at Knitting Factory (tickets) and is headlined by C-86 era UK band The Flatmates whose tight, hook-filled songwriting and loose, loud style -- and a career that only saw them release singles and EPs, breaking up before they managed an album -- makes them one of the quintessential '80s UK indiepop bands.

Equally as anticipated is the return of arch synthpop group My Favorite who were NYC indiepop heroes in an era (the '90s) when the city's music scene wasn't exactly the hopping hotbed of activity it is now. Informed by a youth spent listening to legendary Long Island radio station WLIR, My Favorite had the drama and humdrum town romance of The Smiths, the danceability of the Pet Shop Boys, and a touch of Bowie glamour. (In other words, they were kinda Long Island's Pulp.) The band broke up in 2005, Michael Grace went on to form The Secret History. But mention My Favorite near certain crowds and watch their eyes light up.

Also playing are UK band The Haywains who have been around for more than 25 years but, I'll admit, I was unfamiliar with until they appeared on the Popfest bill. From their Bandcamp page:

Formed in 1988, The Haywains played three-chord jangly punk-pop with bittersweet lyrics and a distinctive dual boy/girl vocal delivery. Part of the do-it-yourself 'indiepop' underground and fanzine culture that thrived around Bristol in the late 80's, the band's refreshing fun approach was characterised by singer Jeremy Hunt's jovial on-stage banter and minimal no-frills charm.

You can stream their 1991 album, Never Mind Manchester, Here's The Haywains, below.

Opening Friday's show are Melbourne, Australia's Bart & Friends which is Bart Cummings of '90s-era band The Cat's Miaow (and a few other groups too). Gathering up musical mates, including Mark Monnone of The Lucksmiths and Pam Berry of Black Tambourine, Bart & Friends' 2010 record Make You Blush was his first in nearly a decade. Both Monnone and Berry will be along for this trip. Berry and Bart will also perform at Littlefield on Sunday (6/1) as part of Popfest, performing the songs of The Cat's Miaow and The Shapiros.

If you want to keep the good times rolling, there's an afterparty at Trophy Bar from 11 PM till late, featuring The Flatmates and My Favorite's Michael Grace on DJ duty. That's free, and the flyer is below.

Speaking of Monnone, he's playing a few shows while here in the States, including two in NYC: the previously-mentioned early afternoon show at Trans Pecos on Sunday (6/1) with Pam Berry, Rocketship, and Beverly. Unfortunately, this show overlaps a bit with Popfest's all-day show at Littlefield (and features almost entirely Popfest bands), but most the Trans Pecos show -- including all Popfest performers -- is scheduled to happen before Littlefield's starts.

Then he plays again at Otto's Shrunken Head on Monday (6/2) which is being billed as "Aussie Hangover Fest" and also features Bart & Friends, The Zebras (who play Spike Hill as part of Popfest on Saturday afternoon), Mid-Stage Orange, and members of The Ladybug Transistor. That's a free show and the flyer's below. 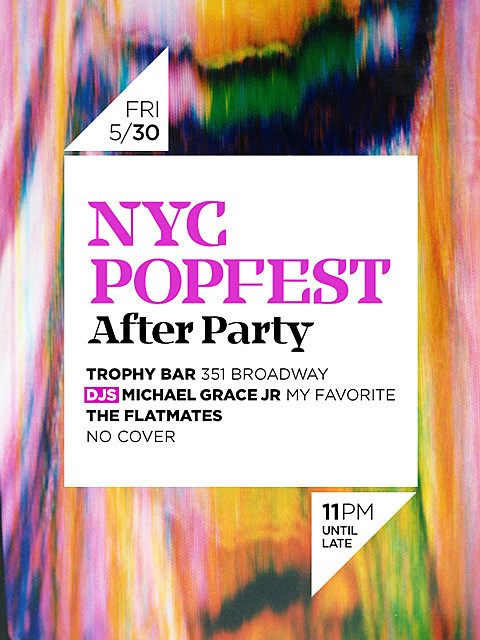 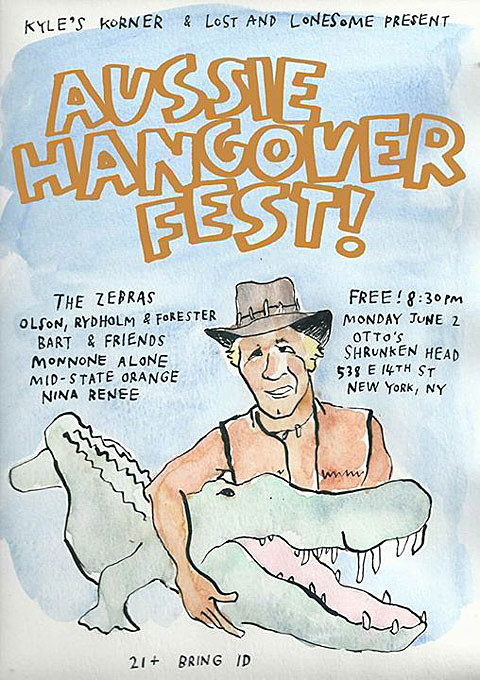