Go Sailor may be band from the past, but they have found Twitter and that's where the above message was posted last night during the NYC Popfest opening night show at Cake Shop where sets were played by PET MILK (PA), AMIDA (UK), GOLD-BEARS (GA), SEA LIONS (CA), DREAM DIARY (NYC), and THE PAINS OF BEING PURE AT HEART (NYC). Bill says it was surprisingly not that crowded, and that Gold-Bears were the stars of the night ("like Superchunk covering the Wedding Present, that kind of energy"). Pains sounded great too, though Peggy Wang joked, "I think we were better at Popfest '07." Here's a picture from their set at Popfest 2011: 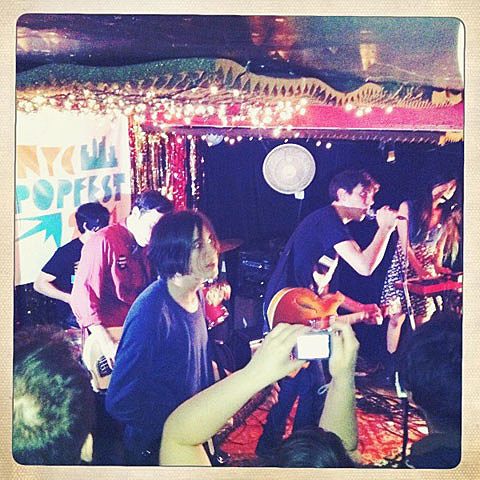 Watch a video of Gold-Bears below.

Go Sailor's tweet also refers to the show they're playing for Popfest at Cameo tonight (5/20). They headline. SODA SHOP (NYC), CAUCUS (JAPAN), THE FELT TIPS (UK), and BETTY AND THE WEREWOLVES (UK) are all also on the bill which Bill discusses in much more detail in his entire fest preview. If you don't have a ticket, they say "LIMITED AMOUNT OF TICKETS WILL BE AVAILABLE AT THE DOOR (DAY OF SHOW)."

Go Sailor member Rose Melberg spoke to NY Press. Why did they reunite? "We had a great time when we got together last year for the Slumberland 20 year anniversary shows. So now when an opportunity comes up to play that works out for all of us we figure we might as well do it. It is mostly just a chance for us to hang out with each other since we all live so far apart." Who knows when they'll reunite again, so don't miss your chance tonight.

Popfest continues on Saturday and Sunday, and invividual day tickets are still on sale for both of those shows. Saturday is at Santos Party House. Sunday is the Rock Shop. More about both shows in our guide, but I do want to just remind you that Sunday's headliner is Fan Modine who doesn't get out much, and whose only other scheduled show at the moment is on 5/28 at Cat's Cradle in Carrboro, NC. The Rock Shop show will double as a record release show for Gratitude the Shipper, his first album in seven years. Two songs from that album are re-posted on the top of this post.

But that's not all. As previously mentioned, many of the bands playing Popfest have other stuff scheduled too, and you'll find some of those shows listed HERE, HERE, and HERE. May you have a very great tweekend.

A video of Gold-Bears performing in the Newtown Radio studios, below...