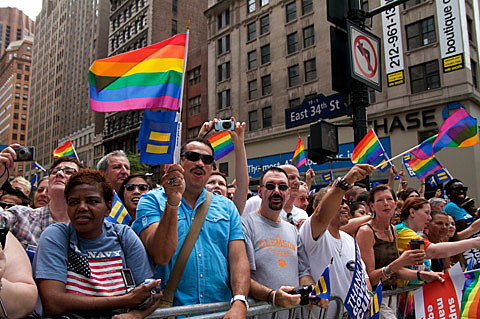 Pride Week, the most colorful time of year, is almost upon NYC, happening June 21 - 28. Official festivities are set to begin with Family Movie Night on Tuesday, June 23 at Hudson River Park's Pier 63, with a free screening of Disney/Pixar's Finding Nemo. The week wraps up with the annual Dance on the Pier at Hudson River Park's Pier 26 on Sunday, June 28, featuring a performance by pop princess Ariana Grande and the the world's longest-running LGBT fireworks display. Tickets for Dance on the Pier are on sale now.

Of course the main event is the Sunday afternoon March (6/28) and this year is a star-studded affair, with actors Sir Derek Jacobi and Sir Ian McKellen, Uganda's Kasha Jacqueline Nabagesera, and artist J. Christopher Neal serving as this year's grand marshals. Between the March and the Dance on the Pier, is the Pridefest street fair. Saturday (6/27) night's VIP Rooftop Party and Teaze party for women (formerly Rapture on the River) are pride week staples, and not to be missed.

There are unofficial Pride Week happenings, too. Rapper Azealia Banks tweeted that, like she did last year, she'll be performing at soon-to-close The Westway on June 23 as part of their weekly Tuesday Westgay party. Details and tickets for that are TBA.

Before Pride Week officially starts, SHADE, the queer warehouse party by Ladyfag and Seva Granik is back in business for Saturday (6/20) at 15 Huron St in Greenpoint with headliner Heartthrob. Tickets are still available.

There are also scores of unofficial happenings in the works - be sure to check out NYCpride.org for more info.

Special stuff: in paying homage to Larry Levan's Paradise Garage, a pioneer queer nightclub of the 70s and 80s, DJs Lisa Frank and the NeedIExchange have dropped two mixes of throwback dance music. Stream both below...