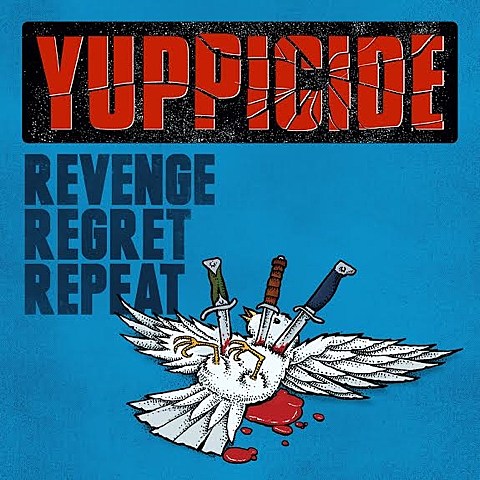 Correct me if I am wrong but hardcore/punk re-unions are not supposed to be THIS good. Formed in NYC in the late 1980's and having faded away in the mid 90's Yuppicide left us with a lot of good memories. The band was accepted by both the "tough guy" NYHC scene as well as the "crusty" NY punk scene, something of a rarity but pointed to the bands uniqueness. Whether it was their identifiable artwork which graced their t-shirts and record covers, lead singer Jesse's English accent and stage persona, or the bands wide array of punk influences it was without question that there was only ONE Yuppicide. [In Effect Hardcore]

New York hardcore vets Yuppicide reunited in 2010 around the same time Dead City Records put out the career-spanning compilation, Anthology '88-'98. Two years later they released new music with the American Oblivion EP, and this year they'll follow that their first full length since 1995's Dead Man Walking. The new album is called Revenge Regret Repeat, and it's due out on December 4 via Dead City. Here's what vocalist Jesse Jones and guitarist Steve Karp tell us:

Jesse Jones (vocals): "Revenge Regret Repeat is a rowdy, angry punk record, and I'm proud that we haven't mellowed with age. The lyrics are about facing your demons, past or present, and the one staring back at you in the mirror. I believe that forgiveness is giving up hope for a better past, but sometimes you just can't let go until the fuckers pay what they owe!"

Steve Karp (guitar): "I can't wait for people to hear this album. Everybody came together and put in 120% to make it a rock-and-roll-killing-machine of a record. Taken in its totality, I think 'RRR' really is Yuppicide's love letter (and not the Dennis Hopper 'love letter') to underground music, more specifically to hardcore punk. The music, the lyrics, the art; it all reflects our 30 or so years of being involved with this music- it made us the people we are today and this album shows that. It stands with the rest of our catalog and really shows us as a honed unit, full of anti-establishment venom, biting wit and brutal introspection. It's an album that doesn't compromise in its rawness or ferocity. Whether you've been following us since 1988 or this is your first time hearing Yuppicide, prepare your ears for a thorough beating."

Going by the clips in the album trailer premiering below, it sounds like their unique combination of hardcore, classic punk, ska and more is indeed still raw and ferocious. Check it out, along with the tracklist.

The band also have a release show planned. It's a 3 PM Sunday matinee at The Grand Victory on December 13 with Ice Cold Killers. Tickets are on sale now.