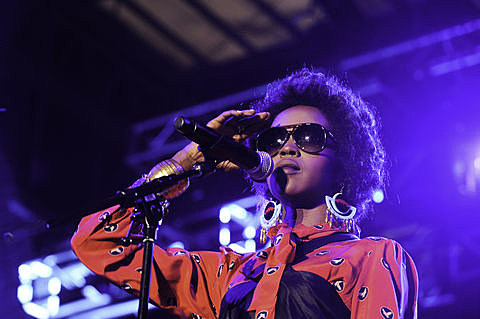 A day of being grateful for what they've got, overeating and subsequent afternoon naps, Thanksgiving is the start of a long weekend for many folks, but one that usually doesn't have the most options for things to do -- or bands to see. Weather's not supposed to be so great either. Still, we've rounded up ten musical things to do in NYC during Thanksgiving Weekend. Plus one you can do anywhere with an internet connection and love of making fun of bad movies.

1) Neo-soul great Lauryn Hill is doing a one-off night at Bowery Ballroom on Wednesday (11/27) ahead of her upcoming December tour. Lauryn's doing two shows (6 PM and 10:30 PM) and tickets (at $100) are still available for both of them. Head to the early one, and you'll still have time to go out for the biggest bar night of the year.

2) Another hip hop Thanksgiving Eve option is the NYC stop of the Smokers Club Tour which brings Joey Bada$$, Ab-Soul, The Underachievers and more rappers to Best Buy Theater (11/27) for what should be an incredibly fun show. Tickets are available.

3) Whether you're actually buying holiday gifts or just getting something for yourself, there are a bunch of exclusive titles available for Record Store Day Black Friday (11/29), including Steve Albini's 2013 mix of Nirvana's In Utero, Josh Tillman's soundtrack for The History of Caves, and Stiff Records' Ten Big Stiffs 7" box set.

4) Speaking of record stores, NYC just got it's own branch of UK indie chain Rough Trade and they've got a ton of shows this weekend in their spiffy performance space. On the free side, on Saturday afternoon there's Marissa Nadler (1 PM) and Phosphorescent (3 PM) ; Friday and Saturday night feature sold-out ticketed shows from NYC legends Television.

8) Philly punks The Menzingers are using the Thanksgiving weekend to do two headlining shows, both with killer openers. They'll do one in NYC on Friday (11/29) at Bowery Ballroom with lyrical emo kids Modern Baseball, anthemic Jersey punks Banquets and post-hardcore noodlers Ma Jolie; then another in their home state on Saturday (11/30) at The Note in West Chester with Modern Baseball, punky indie rock trio Cayetana, and Atlanta rockers Cassevetes. The NYC stop is unfortunately sold out, but you can still grab tickets to the PA one.

9) At the Living Gallery (1094 Broadway off Dekalb Ave) in Brooklyn, there will be a Punk/Hardcore Record Swap and Vegan Potluck on Saturday (11/30) from 1-5 PM. You can buy and sell records, merch, and comics, plus local distros and labels will have tables set up too. Admission is $3 if you bring food (vegan or vegeterian food is "HIGHLY preferred") or $5 if you don't, and proceeds will benefit Occupy Sandy, Hope For New York, and City Harvest. More details at the Facebook event.

10) Apart from Spike Lee's remake of Korean revenge cult classic Oldboy, there's not a lot of exciting action at the cineplex this Thanksgiving Weekend. While it doesn't feature explosions or groups of teens forced to kill each other as entertainment, The Punk Singer does feature an intimate portrait of activist and indie rock legend Kathleen Hanna, currently of The Julie Ruin. It opens Friday at IFC Center in Manhattan, and at Nitehawk in Williamsburg. Hanna will be in attendance at the 2 PM Nitehawk screening on Saturday.

And lastly a non-musical 11): for those who have fond '90s memories of watching Mystery Science Theater 3000's "Turkey Day" marathons on Comedy Central, show creator Joel Hodgson will be celebrating its 25th anniversary with an online version of the T-Day marathon. They'll be showing lots of classic episodes, including some that have never been released on home video. The Turkey Day marathon happens here starting at noon EST.

Have a safe and fun Thanksgiving Weekend!