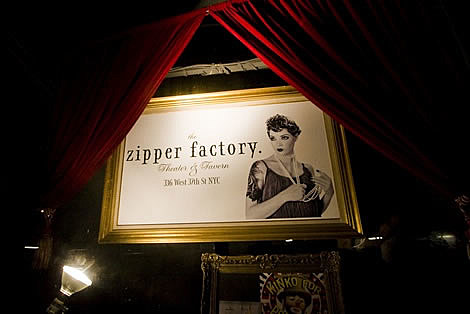 The Zipper Factory, a theater and tavern, has closed, its owner, Lee Z. Davis, said. The theater, which opened in 2001, was home to such productions as "The Sensuous Woman" by Margaret Cho, "Jacques Brel Is Alive and Well and Living in Paris," "Jesus Is Magic" by Sarah Silverman, "Betty Rules" and Alan Cumming's adaptation of Jean Genet's "Elle." Payments for advance tickets for shows scheduled at the theater will be refunded. ... "Altar Boyz," the musical comedy about to begin its fifth year at New World Stages, will make tickets available on a "pay what you can" basis for the 8 p.m. performance on Jan. 21. Tickets, which will cost a minimum of $1 for the theater restoration fee, will be available at 7 p.m. on a first-come/first-served basis. Regular prices for the show are $26.50, $59.99 and $79.99.Smallest Audience for 'Idol' Debut in Series History. [NY Times]

Sarah wrote in, "I am sure you heard of the Zipper Factory demise - I was in NYC to see Walter Sickert & the Army of Broken Toys play (1/13) and was arriving as everyone was being kicked out of the building. Edrie was kind enough to give free CDs to everyone who showed up (the show was almost sold out according to the producer). There is a great note about it here on their Face Book". You can also read it on MySpace.

Playbill adds, "David Conrad Brouillard and Bill Coyle served as the theatre's most recent artistic producer and producing associate, respectively. Coyle, a respected longtime publicist and promoter in New York City's theatre community, told Playbill.com, "David and I are currently exploring our options of starting over ourselves. We met with the owner to try to re-open on our own, but without any notice or planning we don't have the resources in place to give three months [rent] up-front. ...It'll be a while before we know anything.""